The HP Envy 14 Spectre is an unusual (and expensive) ultrabook with a 14 inch display, a $1400 starting price, and a tough glass lid and palm rest area. Now it looks like the company will be launching a 15 inch version as well.

Update: Laptoping presents some evidence that HP may simply be launching a revamped HP Envy 15 notebook and not an HP Envy 15 Spectre ultrabook. 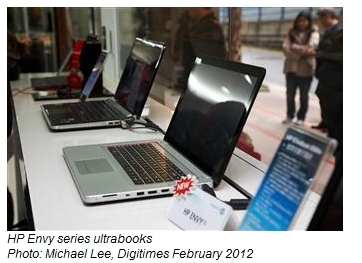 The 14 inch model went up for order in the US yesterday. But DigiTimes reports that HP unveiled two models for the Taiwan market this week, including one with a larger 15 inch display.

In Taiwan the smaller model will sell for about $1680 while the 15 inch model has a price tag of nearly $2200. It’s likely that the 15 inch ultrabook would be cheaper if and when it were released in the US… but based on the price HP is charging for the first model, I wouldn’t bank on it being much cheaper.

The Envy Spectre line of ultrabooks have Intel Core i5 or Core i7 processors, 128GB to 256GB solid state disks, backlit keyboards, and 1600 x 900 pixel displays. But the biggest thing setting them apart from ultrabooks from Acer, Asus, Lenovo, Samsung, and Toshiba is the Gorilla Glass surface covering much of HP’s expensive laptops.

if you’re looking for something a little more affordable.