The HP Envy Rove 20 is an all-in-one desktop PC which has a touchscreen and a built-in battery so that you can pick it up and carry it around the house like a big tablet. Weighing almost 12 pounds, it’s not exactly as portable as an iPad, but it also doesn’t have to be tethered to your desk by a series of cables the way a desktop computer normally would be.

Introduced in May, the HP Envy Rove 20 is now available from Best Buy for $980. 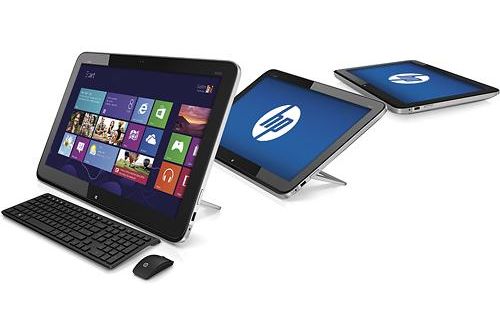 It also has an Ethernet jack, SD card slot, Intel Wireless Display technology, Bluetooth, and 3 USB 3.0 ports. It comes with a wireless keyboard and mouse.

A number of companies have introduced computers recently which blur the lines between all-in-one desktop computers and tablets. Asus, Dell, Lenovo, and Sony all have models that walk that line. The idea is that you can use your computer in new ways — and new places. For example, you can pick up the PC and carry it around the house, allowing you to use the same computer in your office, living room, and kitchen.

You can watch a movie in one room, carry the PC to another and use it to read recipes or watch a cooking show while you prepare dinner. Or you can lie it flat on the floor or a tablet and play digital board games.

What you’re probably not going to do with a 20 inch, 12 pound tablet, is stuff it in your bag and take it to school with you.