Most of the new laptops and tablets HP is launching this spring are updates to existing products. The HP EliteBook 1050 G1 is something brand new (the G1 stands for 1st-gen, after all). 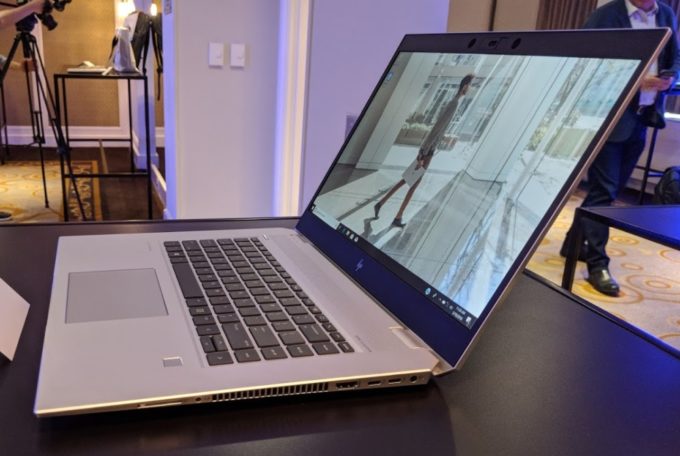 That’s a pretty steep price, but this notebook has premium features including some that are designed for business users including HP’s SureView technology (which makes the screen difficult to read at an angle with the press of a button so people can’t spy over your shoulder) and an optional HP Privacy Camera (with a physical cover that slides over the camera when it’s not in use).

There’s also a fingerprint sensor below the keyboard, support for facial recognition, and hardware-based security using HP’s Sure Start Gen4 system. And the system includes collaboration keys on the keyboard for voice or video conferencing. There’s also a “world-facing” microphone on the back of the laptop that can be used for noise cancellation when you’re talking, or for picking up voices of other people in the room when they’re talking (so you don’t all have to crowd around in front of the laptop to join a conversation).

HP says the laptop supports up to 32GB of DDR4-2666 RAM, has support for two SSDs (with a SATA drive bay and support for an M.2 PCIe NVMe SSD), and HP says you’ll be able to configure the notebook with up to 4TB of RAID storage.

The company says the EliteBook 1050 is the “world’s first ultra-slim business notebook with NVIDIA GeForce GTX graphics,” but that’s kind of a moving target. Someone else will probably have a slimmer, or more business-friendly model in a few weeks.

That’s just the starting weight for a model with a 64 Whr battery though. HP also offers an optional “long life” 95.6 Wh battery, but that will probably make the notebook a little heavier.