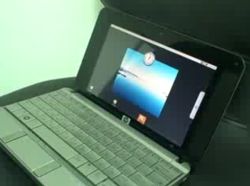 It looks like Asus isn’t the only major netbook maker looking at Google Android as an alternative to Windows and popular Linux distros like Ubuntu and SUSE. The Wall Street Journal is reporting that HP is also looking at Android, an operating system Google designed for use on mobile phones.

Some hackers have already managed to get Android up and running on HP hardware including the HP 2133 Mini-Note. But this is the first I’ve heard of HP considering prelodaing the software on its machines.

It’s also a little surprising because HP has gone out of its way to use SUSE Linux Enterprise Desktop for its higher end netbooks, due to the higher level of support Novell provides for SUSE. And HP created a custom version of Ubuntu called Mi Edition for use on lower priced HP Mini 1000 netbooks. So I don’t imagine that HP would be likely to offer Google Android on its current crop of computers, but perhaps we’ll see an Android version of the company’s next generation netbook later this year.