After going up for pre-order in April, HP’s first Chromebook with a detachable tablet section is now available from Best Buy for $600.

The HP Chromebook x2 was expected to hit the streets on June 10th, but it looks like Best Buy pulled the trigger a little early. Customers who pre-ordered are also starting to report that their Chromebooks are being delivered. 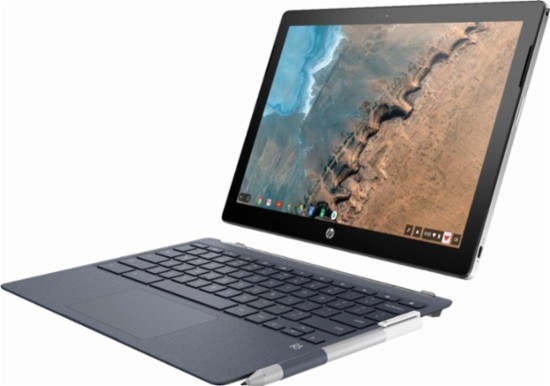 While the HP Chromebook x2 is a bit on the pricey side for a Chrome OS device, it’s got a pretty decent spec sheet, including:

The tablet weighs about 1.6 pound on its own. Add the keyboard dock and you’ve got a 3.1 pound laptop.

What’s probably most interesting about the HP Chromebook x2 is that it’s the first Chrome OS tablet designed specifically for consumers.

Acer actually announced the first Chrome OS tablet earlier this year, but the Acer Chromebook Tab 10 is a smaller, cheaper, less powerful device designed for use in the education market, and it lacks a physical keyboard. I also don’t think it’s actually shipping yet.

While Chrome OS was originally designed as a laptop operating system, over the past few years Google has added a number of features that make it more touchscreen-friendly including a virtual keyboard, an updated UI with touch-sized icons, and support for Android applications.

In some ways, Chrome OS tablets offer some of the best features of a Chromebook and an Android tablet: you get access to touch-optimized apps developed for Android, but the power of the full desktop version of the Google Chrome web browser. Soon you may be able to run desktop Linux apps as well.

That said, the $600 starting price is probably going to limit the early adopter pool for this particular model. I suspect it’ll only appeal to folks already sold on the idea that Chrome OS is a powerful, versatile operating system… which is something that I know some folks are skeptical of.

Now that the first Chrome tablets are shipping, we should start to see real-world reviews soon, and perhaps that will give us an idea of how well these things will fare in the marketplace.