It’s also designed to work with optional accessories including a detachable keyboard and a USI stylus for pressure-sensitive input. First announced earlier this month, the HP Chromebook x2 is now available from Best Buy for $599. 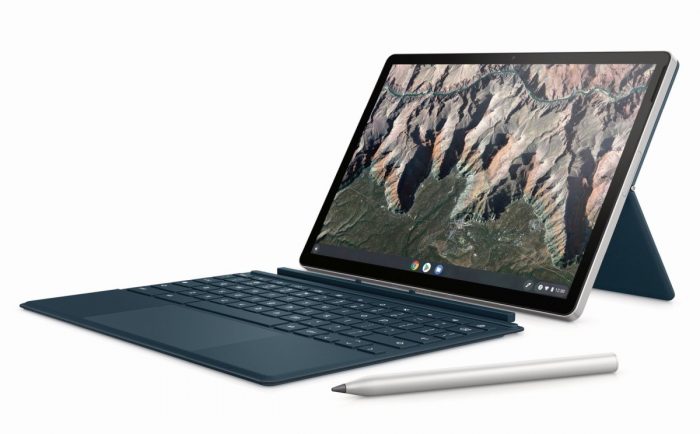 That price gets you a model with 8GB of RAM and 64GB of eMMC storage, but HP says the Chromebook x2 11 will also be available with up to 128GB of storage.

HP’s latest 2-in-1 Chrome OS tablet is unusual in a few ways. It’s the first detachable tablet powered by a Qualcomm Snpdragon 7c processor. It’s one of the only Chrome OS tablets to feature a 3:2 aspect ratio display.

HP’s new tablet is also the first Chrome OS device to ship with a new Google app called Cursive pre-installed. It’s a low-latency note-taking application designed for devices like the Chromebook x2 11 that support pen input. Cursive will roll out to other devices later this year.

HP also includes its own QuickDrop app, which allows you to wirelessly transfer photos, videos, documents, and other files between other devices (including phones and PCs) that have the app installed.

The HP Chromebook x2 11 has an aluminum body, a Gorilla Glass-covered display, and a fanless design. The tablet measures 9.9″ x 7″ x 0.3″ and together with its detachable keyboard, the Chromebook X2 11 weighs 2.6 pounds.

The tablet comes with a rechargeable USI pen, and the version sold by Best Buy also includes the detachable keyboard accessory.