HP doesn’t have a huge presence at CES this year, though they do have a few new laptops to boast about.

The Sleekbook brand is HP’s code for an ultrabook-esque laptop that doesn’t quite fit the strict definition of ultrabooks. Usually this means that the machine is a bit too thick or has a spinning hard drive instead of an SSD. In HP’s case, it also means the possibility of an AMD processor inside instead of an Intel CPU. Such is the case with HP’s newest Sleekbooks, the Pavilion Sleekbook 15 and the Pavilion TouchSmart Sleekbook 15. 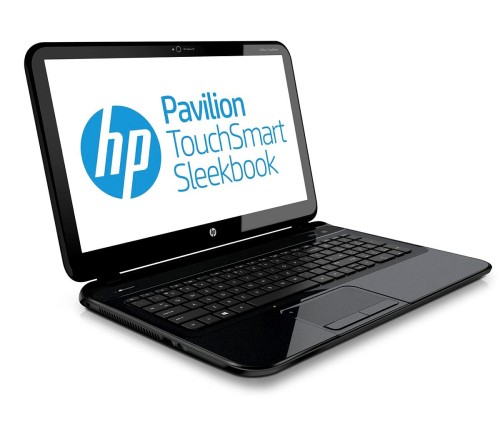 These laptops are pretty much identical to the existing Sleekbooks on the outside, the main difference being the addition of AMD on the 15.6-inch system. They also both come with Windows 8.

Obviously, the TouchSmart Sleekbook has an additional spec: a touchscreen. This is for all you Win8 users who can’t deal with the OS unless you can swipe on the screen.

The AMD-powered Pavilion Sleekbook starts at $479 with an AMD A4 chip, 4GB of RAM, 500GB hard drive, USB 2.0 and 3.0 plus an HDMI port. It will be configurable online, and discrete AMD Radeon graphics will be available as well. This will hit stores on January 13th.

The Pavilion TochSmart Sleekbook starts at $649. You can get discrete graphics here, too, as well as the option for a 1TB hard drive. It will be available February 3rd.

So why go with AMD for the touchscreen Sleekbook? Price is a big part of it. A touchscreen laptop under $700 is quite nice, especially if you’re on a budget. A comparable Intel chip is more powerful, but the AMD A series is fine for everyday tasks. Since these are very mainstream laptops, the processing power you get will fit the audience quite well.

And don’t forget, for that price you’re also getting a pretty light(around 4.6 pounds) and thin system with a good display. For those of you who like flair, the non-touch Sleekbook comes in three colors: black, red, and white. The colors are textured and 3D, which creates quite a nice look that stands out from other PCs. The TouchSmart model only comes in black, but it does sparkle a bit.

Though the Sleekbooks aren’t quite ultrabooks, do they tempt those of you who want an ultrabortable laptop?