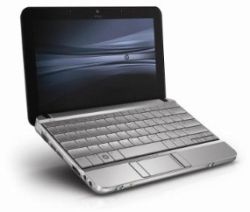 HP may have just launched the HP 2140 Mini-Note during CES last week, but DigiTimes reports the company is already planning another model called the HP 2150 Mini-Note. THe 2150 will basically be the same machine as the 2140, but it will have a built in 3G wireless module and should be available in June, about four months after the February release date for the HP 2140.

Unlike the HP Mini 1000 netbook which is being handled by HP’s consumer division, the HP 2133/2140/2150 Mini-Note models are part of HP’s commercial division, which means that while anyone can purchase one of these netbooks, the machines are aimed at business users. And that means they’ll likely have a significantly higher price than the $350 for the base model HP Mini 1000.