The Google Nexus 4 is one of the first devices to ship with Google Android 4.2 Jelly Bean software. But if you want to install custom firmware, run apps that require root access, or make other changes, there’s good news: The Nexus 4 is just about as easy to work with as earlier Nexus devices.

You can unlock the bootloader, root the phone, and make a number of other changes. In fact, independent developers have already started to release custom kernels and custom ROMs for the Nexus 4. 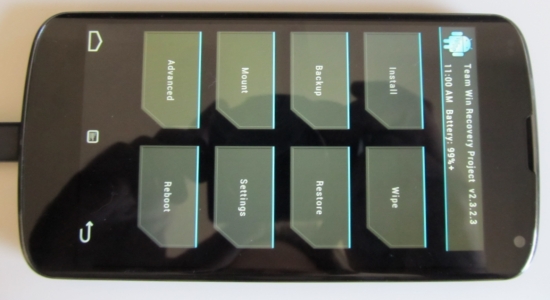 OK, so how do you do that? You can find guides for unlocking the bootloader or rooting your device at the xda-developers forum.

Or you can take the easier route and use a Nexus 4 Toolkit. There are versions available for Windows and for Linux.

Basically these toolkits walk you through the process of installing drivers on your PC so that you can connect your phone with a USB cable, backing up and restoring your device, locking or re-locking the bootloader, rooting your device, and much more.

My Nexus 4 arrived yesterday, so I took the Windows toolkit for a spin. Since unlocking the bootloader wipes all your data and settings, I wanted to do it before I started customizing my phone. 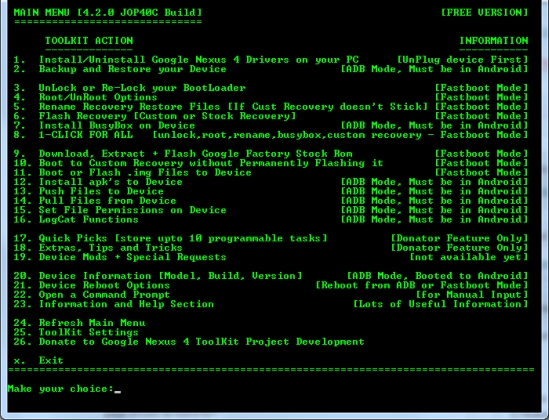 The utility worked exactly as promised, but you should make sure to pay close attention to all on-screen instructions. From time to time it will look like nothing’s happening, but that could be because the tool is busy working in the background… or because you forgot to press a button.

Once you’ve done that, you can also use the utility to root your device, push apps to your phone, view device information, temporarily flash a custom recovery, or install custom ROMs.

The Nexus 4 Toolkit can flash ClockworkMod custom recovery, but because the Nexus 4 uses secure boot, it doesn’t stick. In other words, you can install ClockworkMod temporarily, backup or restore your device, and then revert to stock recovery.

Alternately, you can use the TWRP custom recovery tool to flash updates, install custom ROMs, or backup or restore your device.

All you have to do to install TWRP is root your device, install the GooManager app from the Play Store, and then choose the menu option for “Install OpenScript Recovery” from the settings. 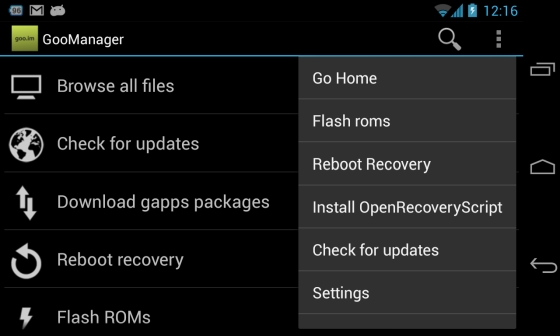 Then you can use GooManager to “reboot recovery to get to TWRP.

One thing to note is that by default the latest version of TWRP will store your backups in a directory that’s inaccessible unless you use a file browser with root access. You’ll want to navigate to the /data/media/TWRP folder to find your backups manually.

In fact, even TWRP won’t be able to find the folder where your backup is stored automatically. You’ll need to navigate to it manually (or copy the backup to a more accessible folder).

Developer franciscofranco has released one of the first custom kernels for the Nexus 4. It’s still a work in progress, so if you want to be cutting edge you can take it for a spin… if you want a stable device you should probably avoid it.

But the franco.Kernel test builds should theoretically offer a lighter-weight kernel than the stock image. Eventually we’ll probably see custom kernels with support for overclocking, underclocking, and other performance tweaks.

As of 11/21/2012, there are at least two custom ROMs available for the Nexus 4. Both are based on the Android 4.2 software that ships with the phone. 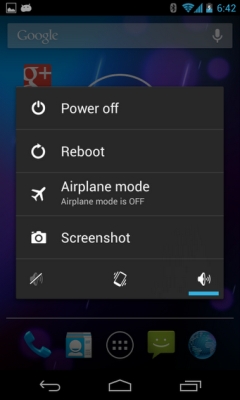 JellyTime includes an updated kernel, options for reboot, recovery, and screenshots from the power menu, and a few other changes. It also comes pre-rooted.

One reply on “How to unlock, root Google Nexus 4, use custom recovery and more”