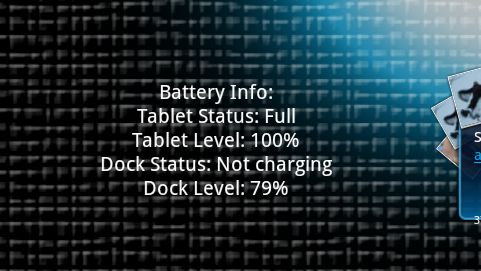 The Asus Eee Pad Transformer gets its name from the optional keyboard dock which turns the 10 inch Android tablet into a laptop-like device. The dock has a keyboard, touchpad, and a separate battery. So not only can you use it to type your heart out, you can also use the dock to extend your tablet’s battery life by about 7.5 hours.

There’s just one catch: the battery meter on the Eee Pad Transformer only tells you how much juice is left in the tablet battery, not the dock battery. That means when you’re using the dock, your battery meter will stay full for around 7 hours before the dock battery dies and then you’ll finally start to see the tablet battery meter start to dip. Fortunately a couple of third party developers have whipped up solutions so you can see how much juice is left in each device. .

The first comes from xda-developers forum member Highland3r. There are two versions of his power widget. The first has white text while the second has black text. Both show the status of your tablet and dock batteries all in one place.

The second is a modified version of the widget which replaces the text with graphical indicators. Xda-developers member beeeone42 put the second widget together.