There are about a thousand apps available for the NOOK Tablet in the official Barnes & Noble Shop. But it’s easy to add thousands of additional apps by downloading them off the internet or installing a third party app store on the tablet. 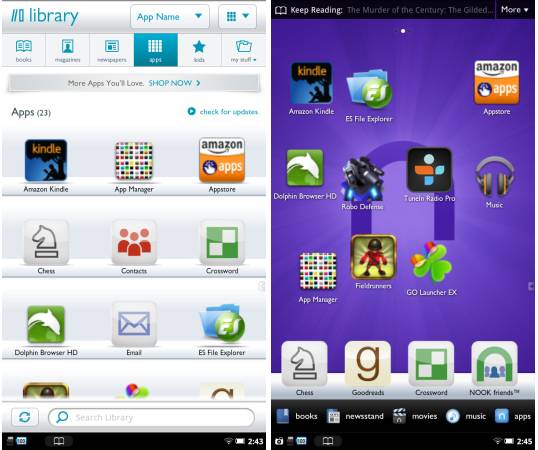 Unfortunately when you “sideload” apps this way, they won’t show up in the NOOK Tablet app library or on the home screen. Instead the easiest ways to find them are either to search for installed apps by name or install a third party app launcher such as GO Launcher EX.

But it turns out there’s an app that was developed for the older NOOK Color tablet which will let you add shortcuts to apps to the NOOK Tablet home screen.

It’s called NOOK Color App Manager, and it’s available as a free download from the Android Market. If you haven’t rooted your tablet and installed the Android Market, you may want to follow our tutorial for doing that, because it looks like this app is hard to come by outside of Google’s app store.

If all you want is a quick and easy way to load a full list of apps, you’re all set. But if you want, you can also use this list to add other apps to your home screen.

This procedure will let you customize your NOOK Tablet home screen with as many apps as you like without relying on a third party application launcher.

By default, new apps are sort of stacked on top of one another, but you can drag and drop the icons anywhere on the desktop. Unlike most home screen apps, the NOOK home screen isn’t arranged on a strict grid, which means there aren’t many limits on how you can arrange your shortcuts to apps or media.

10 replies on “How to add sideloaded apps to your NOOK Tablet home screen, app library”