The Google Nexus 7 is a pretty great tablet right out of the box. It has a speedy NVIDIA Tegra 3 quad-core processor, a 7 inch, 1280 x 800 pixel display, and Android 4.1 Jelly Bean software.

But before doing anything else with my Nexus 7 when it arrived, I wanted to unlock the bootloader, root the tablet, and install a custom recovery.

Those three steps let you:

Since unlocking the bootloader will wipe all data from your device, it’s a good idea either to back everything up before starting, or to just do it as soon as your Nexus 7 arrives, so there’s not much of anything to wipe. I chose the latter option.

There’s also always a chance that something could go wrong, so proceed with caution.

You can download the latest version of Nexus Root Toolkit from the xda-developers forum. It’s designed to run on a Windows computer, and once you’ve downloaded the file, go ahead and install it on your PC. Then follow these steps:

On your Nexus 7 Tablet

Open the Nexus Root Toolkit and click the button that says “Full Driver Installation Guide.” If you’re running Windows 7 you can try the Automatic Driver Configuration option on the next screen.

Follow the instructions, and connect your Nexus 7 to your PC with a USB cable when prompted to do so.

The automatic configuration didn’t work for me, and I got an error message. Here’s what did work instead: I found the directory where Nexus Root Toolkit was installed, opened the Windows Device Manager, found the entry for the Nexus 7, and used the “update driver” option.

Then I browsed for files on my PC, and told Windows to look in the C:\Wugs_NexusRootToolkit.v1.5.2\data\drivers directory.

Once your drivers are installed, you can use the other tools included in the Nexus Root Toolkit. Make sure to choose the model type that corresponds with your device.

The toolkit also supports the Samsung Galaxy Nexus smartphone, so if you’re using it with a Nexus 7 tablet, scroll down to the Nexus 7 section and choose the build number that corresponds with the one you found in the About tablet area. 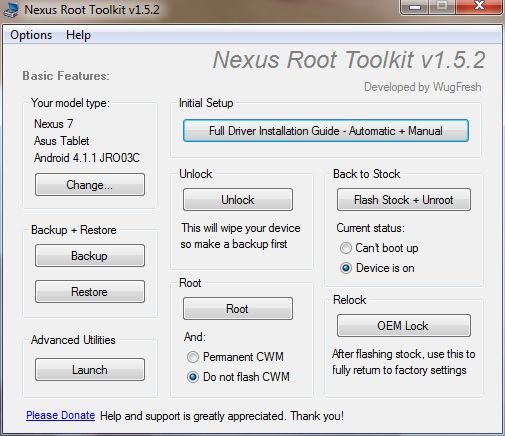 The unlock button will reboot your device, unlock the bootloader, wipe all your data, and then return you to the Android 4.1 setup screen.

The process takes a few minutes, and your device may reboot a few times. Don’t worry. This is normal.

Rooting your device lets you run apps that require root privileges, including the excellent Titanium Backup utility for backing up and restoring your apps.

You have two options for rooting: You can just root your device, or you can also install ClockworkMod Recovery (or CWM).

ClockworkMod is a utility that lets you completely backup your device and restore from that backup if anything ever goes wrong or you just want to restore your device to an early state (but not the factory settings).

I actually chose to simply root my device, because I prefer TWRP, or Team Win Recovery Project. It’s a different custom recovery that’s a little easier to use on devices with touchscreens, and it includes a file browser and on-screen keyboard for changing the names of your backups, among other nifty tools. 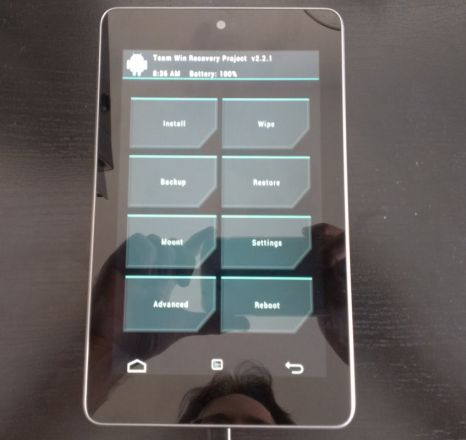 You can install TWRP simply by downloading and installing the GooManager app from the Google Play Store, running the app, tapping the menu icon, and then choosing the option to “Install OpenRecoveryScript.”

This will let you reboot into TWRP by tapping the “reboot recovery” option in GooManager. But this is sort of a one-time thing. The next time you reboot the tablet, the Nexus 7 will overwrite TWRP with the default recovery.

If you want to replace the default recovery permanently with TWRP, here’s what you need to do before installing TWRP:

Now time you can reboot into TWRP as often as you like using GooManager or another app of your choice.

The Nexus Root Toolkit also lets you relock your device if for some reason you would prefer a locked bootloader, flash the stock version of Android that comes with the Nexus 7 and remove root, or backup and restore your device from your PC — assuming you’ve installed ClockworkMod rather than TWRP.

37 replies on “How to root the Google Nexus 7, unlock the bootloader, install custom recovery”