Google Android 4.1.2 is now available for the Nexus 7 tablet. It offers performance and stability improvements, and one noticeable new feature: You can view the home screen in landscape orientation.

If you’ve been holding off on applying the update because you don’t want to lose root access, don’t worry. We’ve already shown how easy it is to use OTA RootKeeper to preserve root access and re-apply it after upgrading from Android 4.1.1 to Android 4.1.2.

But if you’ve accidentally updated without first protecting root, it’s very easy to re-root the device. The steps below will also help you out if you’re just now getting your hands on a Nexus 7 tablet, and it already has Android 4.1.2 installed. 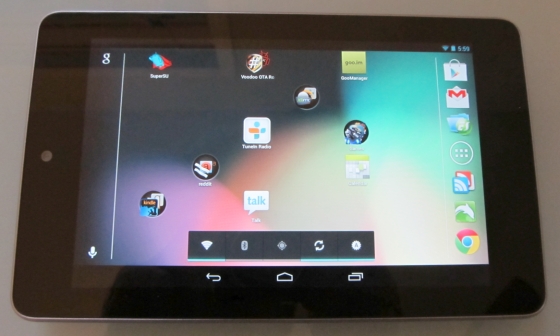 About the Nexus 7 Toolkit

Xda-developers forum member mskip has put together an excellent utility called the Nexus 7 Toolkit. It’s designed to run on Windows computers, and lets you install Windows drivers for the Nexus 7, backup or restore your device, unlock or re-lock your bootloader, root or unroot your device, or make many other changes.

For this tutorial, we’re just going to look at rooting your device and installing BusyBox (since some apps that require root access also require BusyBox). 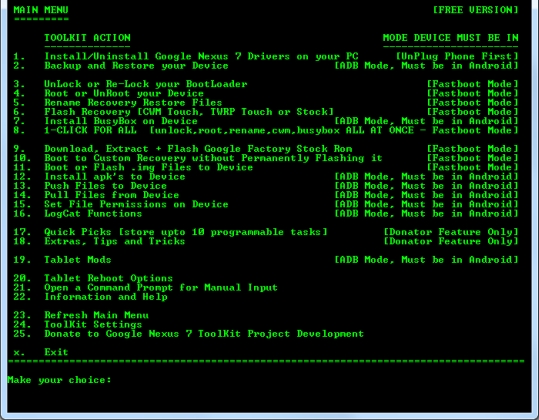 Toward the end of the video you’ll see that I install TWRP custom recovery. That’s something that’s only possible because I unlocked the bootloader on my device previously… and that’s something else you can do with the Nexus 7 Toolkit.

Note that unlocking your bootloader will completely wipe all the system data on your device — so if you think you might want to do it at some point, it’s probably a good idea to do it sooner rather than later (since there’ll be less data to lose).

Also note that while the Toolkit may say it requires Android 4.1.1, it will also work with Android 4.1.2.

How to use the Toolkit

When the install process is complete, the toolkit should open. It looks like a DOS window with green text. You’ll see a list of available options.

If you’ve never installed drivers for the Nexus 7 on your computer, you may want to start by doing that.

Once the drivers are installed, find the option to “Root or UnRoot” your Device in Fastboot mode and enter the number for that option.

Using the Nexus 7 ToolKit version 3.2.0, I chose option 2 to root the tablet and install Busybox.

A screen will pop up asking if you’re already in Fastboot mode. Make sure your tablet is connected to your PC with a USB cable and turned on. If you’re not in Fastboot mode (if you can see the Android home screen, for instance), type no and hit enter. The utility will send a command to your tablet, reboot into fastboot and start the install process.

The whole thing will take a few minutes and include several reboots. Just keep paying attention to the on-screen messages to see what’s going on with your tablet. 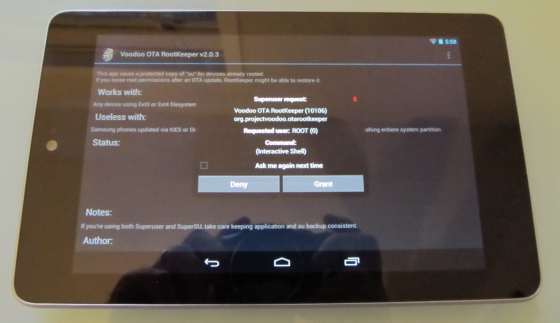 When the process is finished, you should be able to run apps that require root permissions such as Titanium Backup or root file explorers.