Canonical has released tools for installing a developer preview version of Ubuntu 12.10 Touch on the latest Google Nexus phones and tablet.

If you have a Samsung Galaxy Nexus or Google Nexus 4 smartphone, or a Nexus 7 or Nexus 10 tablet, you can download and install a touch-friendly version of Ubuntu on your device.

You’ll need a computer running Ubuntu, a decent internet connection, and the ability to accept all responsibility of something goes horribly wrong. But here’s basically how the process works. 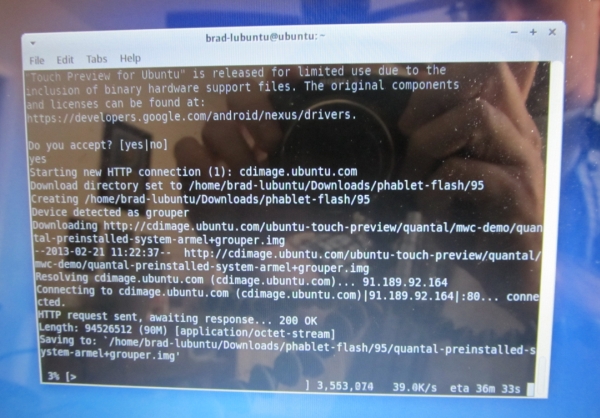 It’s a good idea to make a backup or your device before you start. If you’ve already rooted your device and installed a custom recovery, you can use ClockworkMod, TWRP, or a similar program to do that.

If you haven’t, you’re going to have to wipe your device to unlock the bootloader anyway, so you’re kind of out of luck here.

Also, keep in mind that this is a developer preview. While touch, basic graphics, WiFi, and cameras are supported, as well as GSM network access for the Nexus smartphones, there may be bugs or performance issues.

If you’re cool with that, the first thing to do is set up your desktop PC.

On a PC running Ubuntu 12.10 or later, open a terminal window (press Ctrl + F2) and then type the following commands, one at a time:

Setting up your (soon-to-be-formerly) Android device

If you haven’t already unlocked the bootloader, you can hold the power button and the volume down button to reboot into the bootloader.

From there, plug your device into your PC using a USB cable.

Open a terminal, and type “sudo fastboot oem unlock” without the quotes. When this is done, your bootloader will be unlocked — and any data on your device will be wiped.

But I’m going to assume that if you’re installing Ubuntu on your phone, this isn’t the first time you’ve gone through this process — and your bootloader’s probably already unlocked.

Now you need to make sure USB debugging is enabled on your device. Go into the Settings on your ANdoid device, and from the Developer options area, check the box for USB debugging.

If you’re running Android 4.1 or later, you’ll need to go to the About Phone (or About Tablet) section and tap the Build number 7 times before Developer options shows up in the settings.

And if you’re running Android 4.2.2 or later, you’ll need to accept a host key on your device for debugging to work. So on your PC, type “adb kill-server” followed by “adb start-server” (without quotes) and check the OK box on your tablet when it asks you to accept the key.

Installing Ubuntu on your Nexus device

Assuming you’ve got USB debugging enabled and all the tools on your Ubuntu desktop (or notebook) PC, all you have to do is type the following command into a terminal window:

This will download the appropriate version of Ubuntu for your device and deploy it onto your phone or tablet.

Warning: This step can take a very long time.

You can install future nightly builds just by typing “phablet-flash” without the “-b.”

Going back to Android

When you install Ubuntu on your phone or tablet, it will overwrite your Android operating system.

To restore, download the latest factory image for your device. You can find download links at the Google Developers page.

Then connect your tablet to your PC with a USB cable, extract the disk image, and use the terminal command “chdir directory” where directory is the name of the new directory you created by extracting the file.

From that directory, type the following commands, one at a time:

If you get a message saying you don’t have permissions, type the word “sudo” before the second command.

Once you’ve re-installed a stock version of Android, you can go ahead and root it, install a custom recovery, and restore from the backup you took before you started this whole process. It’s pretty easy to do that on most Nexus devices such as the Nexus 7 and Nexus 4.