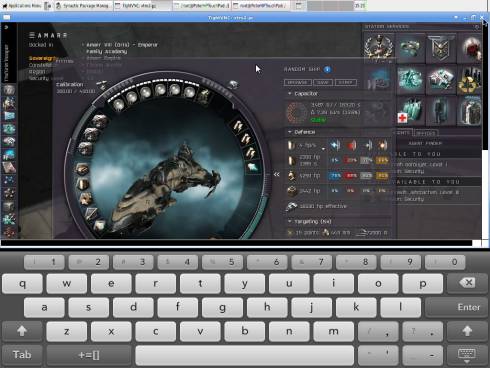 The HP TouchPad is a tablet with a 9.7 inch, 1024 x 768 pixel display, 1.2 GHz Qualcomm Snapdragon processor, and webOS 3.0 operating system. But with HP discontinuing the TouchPad and all webOS smartphones, the future of the operating system remains uncertain. Fortunately you may not be stuck with webOS… or at least not only with webOS.

Projects are already underway to port Google Android to run on the TouchPad. The open source operating system already supports devices with similar hardware, but it could be a while before we see fully usable versions that work with HP’s camera, WiFi, and other hardware.

Update: It’s now possible to install Android on the HP TouchPad, thanks to the folks behind the popular CyanogenMod Android software.

In the meantime, hackers have already figured out how to run Ubuntu Linux on the TouchPad. The process is a bit complicated, and what you actually end up doing is partitioning the storage space on the tablet, installing Ubuntu alongside webOS, and then choosing which to run.

Here are the steps you’ll need to take to do that:

PreWare is a repository system (or app store) for homebrew apps and utilities that aren’t available from the webOS App Catalog. It’s a great resource even if you don’t plan on installing Ubuntu on your TouchPad.

More information about Preware is available in the Preware Homebrew Documentation app for webOS, and you can find several sets of instructions for installing Preware at the WebOS Internals Wiki.

You can do this using the official HP software developer kit, using the webOS Quick Install tool, or by using a standalone installer.

2. Set up Meta-Doctor on your TouchPad

These steps will get you to a command-line version of Ubuntu Linux. From here you can use apt-get install to install Ubuntu packages. For instance, you can install icewm, Xfce or LXDE to give yourself a graphical user interface. Theoretically you could also use GNOME, KDE, or Unity but they require more system resources.

Not all Ubuntu Linux apps will work on the TouchPad, since the tablet has an ARM-based processor and many Ubuntu apps haven’t yet been compiled for ARM.

Users have reported that Firefox, Chromium, and the Flash plugin for those web browsers appear to work though. Other apps reported to work include the LibreOffice office suite, Transmission bittorrent client, and even VNC software for logging into a remote computer.

Thanks to the folks at the PreCentral forums for much of the info!

If you’re looking for an easy way to install Ubuntu or virtually any other Linux distribution on a PC, check out our guide for installing Linux using a USB flash drive.