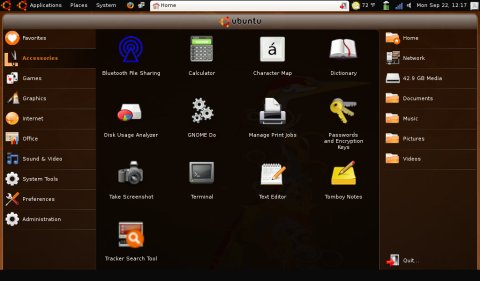 My Asus Eee PC 1000H shipped with Windows XP, and it runs pretty well. But what’s the point in having an 80GB hard drive if you don’t partition it and try installing an alternate operating system every now and again? There are several Linux distributions that reportedly run well on netbooks like the 1000H with an Intel Atom CPU. But I decided to give Ubuntu Eee a try since it’s a custom version of Ubuntu designed especially for the Eee PC.

First off, if you want to install a more traditional Ubuntu desktop environment, you can totally do that. but it takes a bit of tweaking to get all of the hardware working. There are two advantages to going with a custom distro like Ubuntu Eee. First, everything including the Fn keys and the wireless drivers work out of the box. And second, you get to try out Ubuntu Netbook Remix.

I’m still trying to decide whether the latter is a good thing or not. On the one hand, Canonical has added some tweaks to Ubuntu that help the operating system take advantage of the Intel Atom processor’s power-saving abilities. On the other hand, the custom interface which is designed to make it easier to use Ubuntu on a device with a small 9 or 10 inch display can be a bit limiting at times. Fortunately, it’s easy to tweak. But I’ll get to that in a few minutes. First, here’s all you need to know about installing Ubuntu Eee. Note that while I installed the operating system on an Eee PC 1000H, it should work on the Eee PC 901 or 1000 just as well.

Following the instructions at Simple Help and Ubuntu Eee, I decided to try installing Ubuntu using a USB flash drive instead of an external CD-ROM. Both methods will work, but it typically takes a bit less time to install from a flash drive.

And that’s it. I didn’t time it, but the whole process was pretty quick (not including downloading the ISO, which took a few hours).

When all is said and done, you have an Eee PC that can run Ubuntu and doesn’t have some of the common problems that plague users who install a stock version of the Linux distribution. For example,if you install Ubuntu from scratch, the wireless drivers will stop working when your Eee PC resumes from sleep mode. But there’s no such problem with Eee Ubuntu.

That’s not to say everything is perfect. First off, it does take longer to connect to my wireless router using Ubuntu Eee than it does using Windows XP. We’re talking seconds, not hours here, but it is a significant enough difference to be mildly annoying.

Also, while the built in speakers are pretty quite under Windows XP, they’re even more quiet when using Ubuntu Eee. I’m not really sure why there would be a difference and I’ll be looking into possible solutions soon. Update: It turns out that some of the volume controls are a bit funky. You need to crank up the headphone volume as well as the master volume to make the speakers louder.


And finally, battery life doesn’t appear to be quite as good. With Windows XP, I routinely get 5+ hours of battery life. Ubuntu Eee provides closer to 4. I haven’t scientifically tested this yet, so it could just be a difference in how the operating system reports remaining battery life.

I haven’t entirely made up my mind about Ubuntu Netbook Remix’s user interface. It is easier to customize than the Easy Mode interface Asus built for Xandros Linux. But it still feels a little bit like Linux for dummies. That’s not necessarily a bad thing if you’re trying to make your operating system simple enough to use that people who have never tried Linux should have no problems with it. But after spending the last decade or two getting used to the start menu and taskbar paradigm, it takes  a little while to get used to tabs that say things like Internet, Graphics, and Games.

You can choose to disable the ume-launcher application that ships with Ubuntu Netbook Remix and use an old fashioned menu bar. I’ve decided to take the middle ground and I’ve added the menu bar to the panel atop the screen while leaving ume-launcher in place for now.

I’m also still trying to decide whether the “maximus” application is a good idea or not. When it’s running, eveyr program you launch will run in full screen mode. This is a simple way of making that most applications will be as easy to use as possible on a small screen. But it also means you don’t see those little X or _ buttons you’re used to that let you minimize or close applications. Instead you have to right click on their icons in the system tray or use the File menu to exit.

I’ve also installed Gnome-Do, which is a keyboard application launcher sort of like Launchy for Windows or Quicksilver for OS X. Gnome-Do makes it easy to launch almost any application installed by hitting a keyboard shortcut (Super + spacebar by default, although I changed it to Alt + spacebar because that’s the same combo I use for Launchy) and typing the name of the application. No menu bar, ume-launcher, or Easy Mode needed.

I’m still working to find Linux alternatives for some of the Windows applications I used most often. For example, I use IrfanView almost every day on Windows to capture and edit images for blog posts. I’ve had a heck of a hard time trying to get it to run on Linux using WINE, so instead I’m using a combination of the Gnome screenshot application and gThumb Image Viewer for editing images. They work, but they’re not nearly as efficient.

That said, I’ve played with Ubuntu and other Linux distributions a number of times over the last four of five years. And I’ve usually gone back to Windows because of hardware incompatibility issues. For the first time, I’m actually thinking of sticking with Ubuntu for a while. Because it runs well on my Eee PC 1000H. Very well.