The Acer C7 Chromebook is a $199 laptop that ships with Google Chrome OS. But under the hood, it’s a lot like other laptops which can run Windows, Linux, or other operating systems — and there’s an easy way to install at least one of those operating systems.

Developer Jay Lee offers a custom version of Ubuntu 12.04 Linux that’s designed to be easy to install on Chromebooks. It’s called ChrUbuntu and there are versions of Chromebooks with Intel and ARM-based processors. 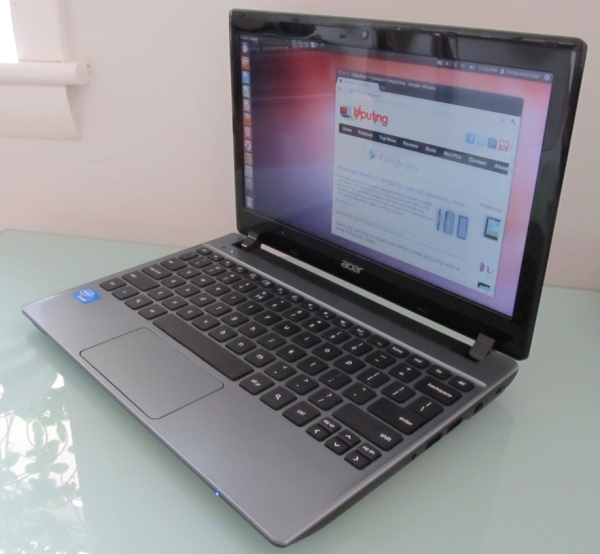 This guide will help walk you through the process of installing ChrUbuntu on the Acer C7, which is both the cheapest Chromebook to date and the first to ship with a 320GB hard drive. That will come in handy since you end up creating a system that can boot both Ubuntu and Chrome OS, and you can dedicated as much disk space as you’d like to each operating system.

The first step is to enable developer mode on the Acer C7. This will let you access settings that are otherwise unavailable, update the BIOS, and boot from external storage, among other things.

Enabling developer mode will also wipe any data you have stored on the device — so make sure to back up any important files before you start. But all you have to do is login to Chrome OS again when you’re done to restore your settings.

Note that once developer mode is enabled and OS verification is turned off, it will take a lot longer for the computer to boot — although you can hit Ctrl + D to exit the OS verification screen more quickly.

Earlier Chromebooks featured a developer switch tucked away behind the battery, but on recent Chromebooks there’s no hardware switch. 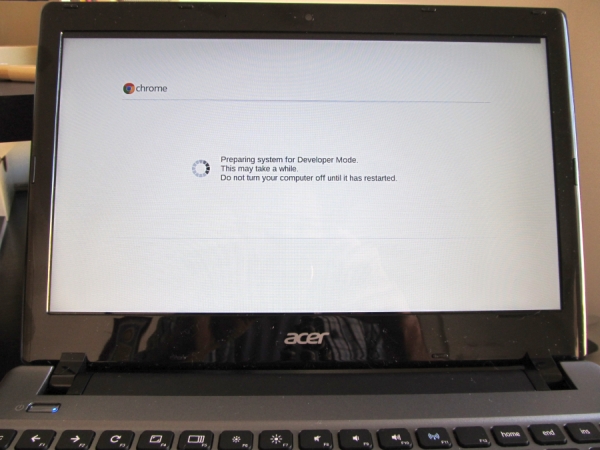 Instead, you turn on the Chromebook and enter the following key combination to get started:

This will cause the computer to reboot and show you a scary screen that talks about data loss.

Then you just sort of sit there for a while until your system reboots and disables OS verification.

You’ll hear a few beeps and then the Chromebook reboots another time.

On this last reboot the system will wipe your data and load the developer mode version of Chrome OS. That entire process takes about 5 minutes.

Once it’s complete, you can boot into Chrome OS, login with your username and password and continue using Google’s browser-based operating system as if nothing had happened… or you can move on to the next step.

Once you’ve enabled developer mode, you can also boot from a USB drive or other external storage, but you’ll have to run a special command to do that.

In order to boot an operating system other than Chrome OS, you’ll need to make sure you’re running the developer mode BIOS. Here’s how to do load it.

1. Turn on the Chromebook.

2. If you haven’t already logged in with your username and password, you’ll see the setup screen — connect to your WiFi network. Alternately you can hook up the Acer C7 to a wired network using an Ethernet cable.

3. Do NOT login! Instead, while you’re at the login screen, press CTRL + ALT + fwd arrow key (the key in the top row that lets you go forward through web pages — its also marked as F2 on the Acer C7). 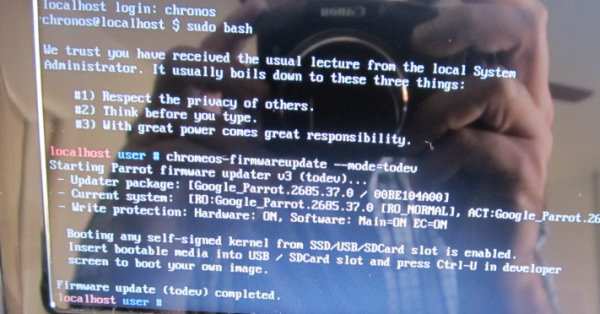 This will bring up a command prompt, where you should enter the following:

Note that there should be 2 dashes before the word “mode.” For some reason WordPress keeps making it look like a single dash.

After a moment, your firmware will be updated and you’ll have developer mode BIOS enabled.

Jay Lee has written out pretty detailed instructions, so I won’t bother repeating them all here. Bu tin a nutshell, if you follow the steps on his website, you should be able to install Ubuntu on most Chromebooks with Intel processors.

Since the Acer C7 is the first model to feature a large hard drive instead of a small solid state disk, you have more disk space to work with. The installer will ask you to choose between 5 and 293GB for your ChrUbuntu installation. This will repartition the hard disk, so choose as much space as you want to be able to use for Ubuntu. The rest will be available to Chrome OS.

So basically, if you’ve followed my guide so far, the next step is to go to ChromeOS-cr48.blogspot.com and follow Lee’s steps 2 through 11.

The whole process will take maybe a half hour, because it involves downloading a large number of files and configuring them, as well as rebooting a few times. 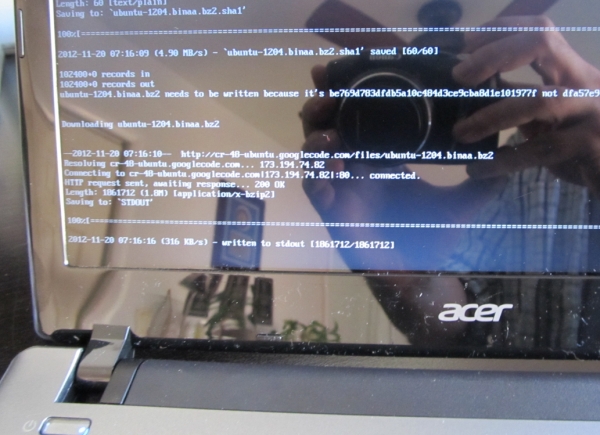 When you’re done, the computer should boot into Ubuntu 12.04.

After kicking the tires a bit this morning, I can say that Ubuntu runs pretty well. Apps launch quickly. The Chrome web browser included in this version of Ubuntu is very responsive. Audio, video, and the webcam all seem to work. And USB peripherals including flash drives and mice work without a problem.

Basically, the Acer C7 works well as a full-fledged Linux laptop, which isn’t surprising since it’s just a slightly modified, cheaper version of the Acer Aspire V5-171 laptop I reviewed this summer.

How to choose which OS to boot

At this point you should be running Ubuntu. But if you turn off or reboot the computer, the next time it loads it will bring you back to Chrome OS. Here’s how to choose which operating system loads at boot.

In Ubuntu, open a terminal window and type the following to make Ubuntu the default:

You can also do that from Chrome OS. Just hit Ctrl + Alt + F2 (fwd arrow) again from the login screen to bring up the command prompt.

You can also switch the default OS back to Chrome OS by entering the following command, either in an Ubuntu terminal or at the Chrome OS command prompt:

In order to exit the Chrome OS command prompt, just press Ctrl + Alt + F1 (back arrow) to return to the login screen. From there you can reboot.

And if you’re asked for a login when you get to the Chrome OS prompt, just enter “chronos” (without quotes).

You can return to Chrome OS the default by disabling Developer mode.

Bear in mind, every time you reboot, you’ll have to deal with the OS verification screen before the operating system loads… so say goodbye to your speedy 20 second boot speeds. If you don’t want to wait 25 seconds for the warning message to go away, you can speed things up by hitting Ctrl + D, but booting still takes longer once you’re in developer mode with OS verification turned off.