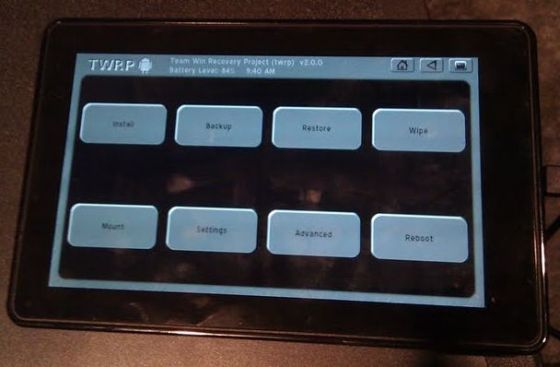 The folks at Team Win have released a new recovery tool for Android devices called Team Win Recovery Project 2.0. It’s an alternative to the popular ClockworkMod Recovery utility, and lets you backup or restore your device, install custom ROMs, or make other changes.

Update: Note that this article was written in 2011 and refers to the original, first generation Amazon Kindle Fire. Do not try to use this method to install TWRP on a Kindle Fire 2, Kindle Fire HD, or Kindle Fire HDX tablet.

The biggest difference between TWRP 2.0 and ClockworkMod is that is that you can navigate TWRP 2.0 using a touchscreen. That means you don’t need to use volume buttons, home buttons, or power buttons to move through the options.

While that may be a nice feature for many smartphone and tablet users, it’s a must-have for anyone that wants to be able to flash custom firmware on an Amazon Kindle Fire, because that 7 inch tablet doesn’t have volume buttons or a home button. It only has a single button for turning the device on and off.

Xda-developers forum members JackpotClavin and Whistlestop have done some pretty nifty things with that one button, allowing users to install a version of CyanogenMod 7 based on Android 2.3 on the tablet or restore the standard Amazon software. But since those tools rely on a modified version of ClockworkMod, up until now there was no simple way to create a complete backup of your system or quickly switch between different firmware.

I’ve been playing around with TWRP 2.0 for a few hours and I’ve managed to use it to create backups of my Kindle Fire running CyanogenMod 7 and running the stock Amazon software. This allows me to switch between operating systems relatively quickly and easily. I also wiped my system and re-installed CyanogenMod from scratch.

Installing TWRP 2.0 can be a bit of a pain and while it’s difficult to actually leave your tablet in a complete unbootable state, it is easy to make the tablet appear unbootable. If you don’t know your way around adb, fastboot, and other Android developer tools you may want to hold off on installing TWRP for now.

But if that doesn’t scare you, here’s how to install TWRP 2.0 on a Kindle Fire if you’re using a computer running Windows.

Update 12/19/2011 The steps listed below are the original method for installing TWRP…. the hard way. It’s not a bad idea to familiarize yourself with them in case anything goes wrong. But you can find another recommended method at RootzWiki or better yet, just follow the steps from the TWRP website for installing the latest version of the team’s custom recovery. As of April, 2013, that would be TWRP 2.5.

Also note that this article was written in 2011 and pertains only to the first-generation Kindle Fire. If you have a Kindle Fire 2 or a Kindle Fire HD, you’ll need to find appropriate software for installing a custom ROM on those devices.

Now on to the original, long-form instructions.

If you follow the steps you’ll end up replacing the bootloader and the recovery on the tablet.

1. Root your Kindle Fire using SuperOneClick and make sure adb is enabled.

2. Download the latest version of FireFireFire, a custom recovery tool for the Kindle Fire.

3. Unzip the utility and copy the u-boot.bin file to the directory where you have adb installed. For instance, c:\androidsdk\

5. Copy that file to the same directory (such as :\androidsdk\)

6. Open a command prompt by opening the Start Menu and typing “cmd” and pressing enter.

8a. Make sure your tablet is connected to your computer with a USB cable.

8b. Optional: type “adb devices” to make sure your Kindle Fire is connected and adb is functioning properly. If this works, you should see a listing for your device.

9. Copy the two files to your Kindle SD card by entering the following commands and pressing enter after each:

10. Open an ADB shell and then install the bootloader and recovery by entering the following commands one at a time. Note that if you get a message saying “permission denied,” it means that your tablet hasn’t been rooted properly. Try running SuperOneClick again.

11. Reboot your device with the following commands.

That is pretty much it. You should now have FireFireFire installed and TWRP 2.0 will finish installing the first time you enter recovery.

What this means is that when your device reboots, instead of the Kindle Fire logo you should see a yellow triangle with a fire icon in the center. If you do nothing your Kindle should reboot into whatever operating system was running when you started.

If you press and hold the power button for a few seconds when the yellow triangle shows up you should be able to enter TWRP 2.0. 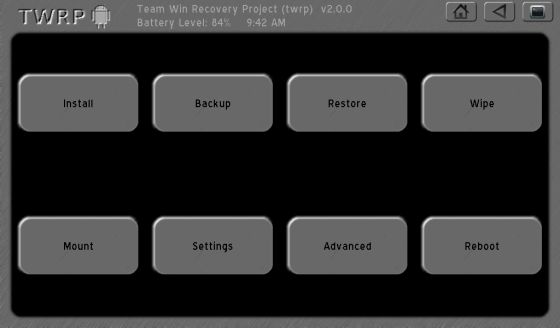 From there you can tap the various options to backup your device, restore your device from a previous backup, flash a new ROM, or flash a different update. For instance, you can install the gApps.zip for CyanogenMod 7 from this menu in order to add support for the Google Android Market and other Google apps. 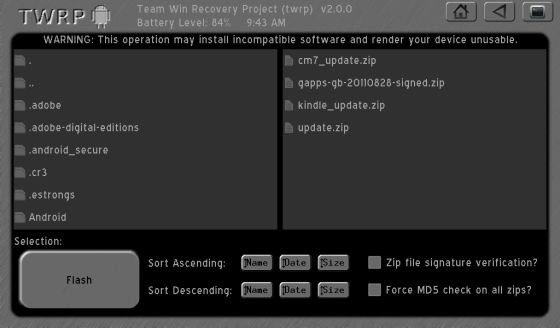 Warning: If you install TWRP 2.0 and FireFireFire and then try to reboot directly to recovery from CyanogenMod 7 you’ll get stuck in recovery and won’t be able to boot Android. You can avoid this by powering down the tablet instead and just entering recovery by pressing-and-holding the power button for a few seconds when FireFireFire runs.

If you do get stuck in recovery, connect your tablet to your computer, open an adb shell and type

This should get you back to your operating system. If that doesn’t work or adb doesn’t recognize your device, try the xda-developers forum link above which explains how to perform the same action using fastboot rather than adb.

TWRP 2.0 also supports the HP TouchPad, Barnes & Noble NOOK Color, and a number of other phones and tablets.