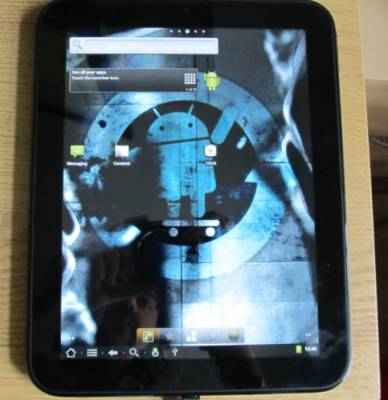 The CyanogenMod team has released the first public build of Google Android for the HP TouchPad tablet. Right now the software is still in the alpha phase, which means that not everything works as it should. There are still bugs with the Bluetooth, camera, and other functions, for instance. But for the most part, the operating system is now up and running on HP’s discontinued tablet and anyone can install it.

While the HP TouchPad originally shipped with webOS 3.0 software, the tablet’s hardware is similar to many Android tablets. Since the future of webOS is uncertain — and right now there are hundreds of thousands of apps available for Android and less than 10,000 apps for webOS, many of the people who picked up cheap HP Touchpads when HP discontinued the tablet in a $99 fire-sale have been looking forward to installing Android.

The steps below will help you to do just that. This will create a dual-boot setup, allowing you to switch between Android and webOS. Again, this is alpha software, and things can go wrong. You’ll also lose music or other media stored in webOS when you follow these steps.

The current version of CyanogenMod for the TouchPad is based on Android 2.3.7. Once Google released the source code for Ice Cream Sandwich, developers will start working to port it to the TouchPad, but that work could take several months to complete.

Update 1/18/2012: CyanogenMod 9 Alpha 0 has been released. While it’s still pretty rough around the edges, this is the first build of Android 4.0 publicly available for the HP TouchPad. You can install it by following our step-by-step instructions.

They’re similar to the instructions below, but there are a few key differences.

Update 12/15/2011: CyanogenMod released Alpha 3.5 of CyanogenMod 7.1 Android for the HP TouchPad. The only real change to the install process is that you now download the alpha 3.5 file instead of the Alpha 1 file. The rest of the steps remain unchanged.

If you’ve already installed CyanogenMod Alpha 1 and you want to know how to upgrade to Alpha 3.5, you can follow our step-by-step instructions. You’ll likely be able to apply future updates following the same steps.

Instructions for a fresh install:

If you want to install the Google Android Market and Google apps such as Gmail and YouTube (which you probably do), you’ll also want the gApps installer for CyanogenMod. You can download it from goo-inside.me or from the CyanogenMod wiki. 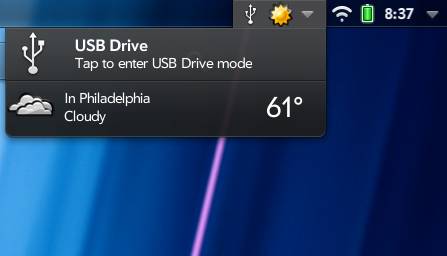 Do not unzip these files first.

If you want to install the Google Apps including the Android Market and Gmail apps, scroll down to the bottom of this article for details on how to add those features. 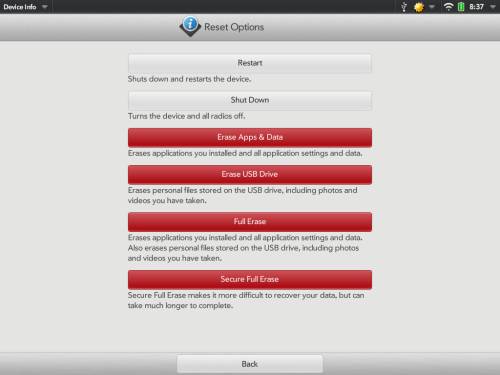 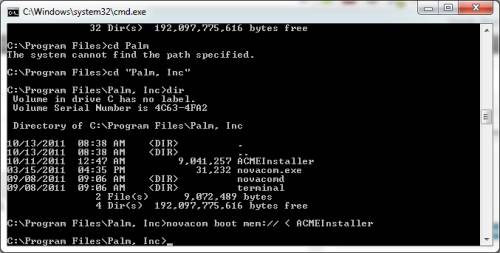 That’s pretty much it. For the next few minutes you should see text flying across your screen. When it’s done, the HP TouchPad will boot Google Android. 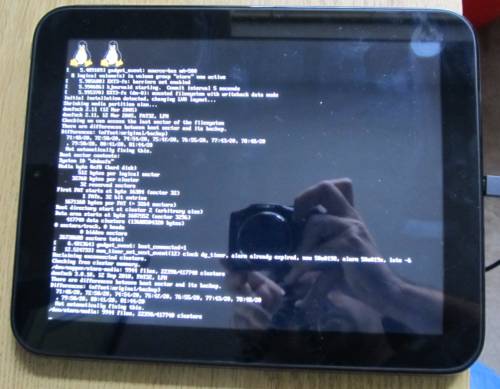 In order to get back to webOS:

Note that you’ll only be able to reboot to webOS if you’ve installed the “moboot” file as described above.

This method installs the open source CyanogenMod 7.1 version of Android on the tablet. It’s based on Google Android 2.3.7 software.

If you didn’t install the Android Market and other Google apps, it’s not too late to do it at this point. Just follow these steps:

If you’re familiar with using ClockworkMod Recovery, you can also place any update files in the root of your device’s storage and reboot into recovery from Android and use ClockworkMod to apply updates.

Note that the first time you boot after installing gApps you may want to hit the “cancel” button instead of signing in with your Google account right away. That way you have time to connect to a WiFi network before the Android Market tries to load the list of available Google applications.

Even if you do install the Android Market, you may find that some of your favorite apps aren’t listed. I couldn’t find the Facebook, Twitter, Google Maps, or Dolphin HD web browser apps when I searched the Market for them on the TouchPad.

This is likely because the Android Market doesn’t think they’ll be able to run properly on the TouchPad’s hardware. They will.

You just need to install them manually. If you have a rooted Android phone or another device you can use an app such as Titanium Backup or ROM Toolbox to create backup copies of any apps installed on your device. You can then email them to yourself or copy them to your tablet using another method.

I was able to successfully install all four apps listed above. They don’t all look great on the TouchPad’s 9.7 inch, 1024 x 768 pixel display, but they do run.

Update: There’s an update that fixes the problem with the Android Market that had prevented certain apps from being listed. If you’re running CyanogenMod 7.1 Alpha 2, then the Android Market fix should come pre-loaded. If for some reason you’re still using Alpha 1, there are two ways to install the Market fix.

Method 2: Using Android or webOS and the ACMEInstaller

Once you’ve done that, you should be able to find Google Maps, the Dolphin HD or Opera web browsers, or other apps in the Android Market.

If you’re wondering exactly how the ACMEInstaller works, you can read more about it at the CyanogenMod blog. Basically, the app resizes the webOS media volume to create space for Android system, cache, and data volumes. It then installs CyanogenMod, the Moboot bootloader, and anyother files such as the Google Apps.

This is why using the installer tool will erase any songs, photos, or other media stored in your HP TouchPad webOS media directory.

The good news is that CyanogenMod 7.1 for the TouchPad will then treat the webOS media area as if it were an SD card — so you can access webOS media from Android, or access your Android files from webOS.

You can find out more about how the first alpha release of CyanogenMod for the HP TouchPad works in my hands-on post, or check out this video:

What to do if you can’t reboot to webOS

If you followed the instructions and put Moboot and ClockworkMod Recovery in the cminstall folder when you first flashed Android you should be able to use the “reboot to webOS” option to restart your tablet in webOS. If not, you can only reboot to Android — but don’t worry. There’s a way to fix this.

That should send the new components over to your TouchPad and the next time you boot you should have the missing features such as the ability to enter ClockworkMod Recovery to select your boot options.

What do to if ClockworkMod Recovery fails to install

It’s possible that Android may install properly, while the ClockworkMod Recovery installation fails. One theory is that this happens sometimes if you have a custom webOS kernel in the /boot partition. Here’s what you can do manually install the Recovery:

First, make sure your device is really frozen. The install process can take a while, so it might look like nothing is happening even when there’s activity. But if five or six minutes pass and you find yourself looking at blank screen, try pressing and holding the power button and home button at the same time for about 30 seconds. This should cause your tablet to reboot.

CyanogenMod 7.1 for the HP TouchPad is still alpha software, which means it’s still pretty rough around the edges. One of the biggest problems users have found is the so-called “sleep of death,” which basically means that from time to time the tablet will fail to resume from sleep when you press the power button.

One possible fix for this is to install a software patch that should eliminate or at least reduce sleep of death instances. You can find details on how to do that in our article about the sleep of death.

Restoring webOS with the webOS Doctor

If you royally mess things up you can also try to restore your system to factory default condition using the webOS doctor. The folks at webOS Internals have put together a nice set of instructions for doing that.

I want to restore webOS, uninstall Android, and recover all missing space

If you just use the webOS doctor to restore webOS, you won’t actually erase Android or change the storage partition size — which means the space in your media partition that was allotted for Android will still be inaccessible.

But the CyanogenMod team has released a tool called ACMEUninstaller which you can use to completely remove Android and change your partitions back to their normal size.

Just download the latest version from the link at the RootzWiki forum, unzip the app to your Palm Novacom directory and run it the same way you would run the ACMEInstaller app.

Bonus round: If Android isn’t your thing, you can also install Ubuntu Linux on the TouchPad.

Note that while it’s pretty hard to completely “brick” the tablet and leave it entirely unusable, it is possible to do so. Installing Android may void your warranty — especially if you’re unable to restore the tablet to its factory default settings. So please proceed at your own risk, and understand that neither Liliputing nor the developers at CyanogenMod can be held responsible if something you do to your tablet causes it to stop working properly.