The Barnes & Noble NOOK Tablet ships with a custom version of Google Android 2.3 Gingerbread. But it doesn’t include the Android Market and it has an unusual app launcher and home screen and only allows you to use 1GB of the available 12GB of disk space for files not downloaded from the B&N Shop.

Adventurous NOOK Tablet hackers have found ways to deal with most of those issues — but if you want to simply scrap the B&N software that comes with the $249 NOOK Tablet and install CyanogenMod 7 for a more traditional Android 2.3 experience, now you can. 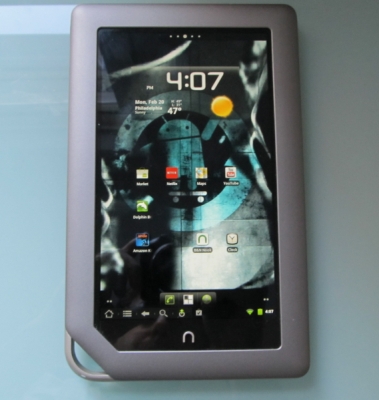 A group of independent developers has been testing an early build of CyanogenMod for a few weeks. Now that some of the most dangerous bugs have been removed, developer CelticWebSolutions has made his build of CM7 available for download.

It’s still alpha software, which means there may be some bugs. But as of CyanogenMod 7 Alpha 12 for the NOOK Tablet, HD video works, YouTube HD video works, Netflix video playback is supported, and the odds of turning your tablet into a $249 brick are much smaller than they used to be.

Note that you’ll lose access to the B&N app store if you install CyanogenMod, but you can install the NOOK app from the Android Market if you want to read eBooks or periodicals from the NOOK store.

You’ll also probably void your warranty and forfeit any actual support from B&N if you do this, so proceed with caution.

Here’s how to install CyanogenMod 7 on the NOOK Tablet:

ClockworkMod Recovery is a utility that you can use to backup and restore all the data on your tablet or flash (install) custom software. There are a few different ways to install it, but I’m going to cover two methods here.

The first is probably the simplest way if you haven’t already rooted your NOOK Tablet.

Xda-developers forum member Indirect has put together a Windows utility that lets you prepare a microSD card with ClockworkMod Recovery so that when you boot the NOOK Tablet with the SD card installed it will load ClockworkMod (CWM).

In order to use the utility you’ll need a microSD card with 2GB of space or more. The tool will wipe all data on the card, so make sure you backup any important files first.

Note that he also explains how to use this method to root your tablet and install the Android Market, but this isn’t strictly necessary if you’re planning to install CyanogenMod, which is pre-rooted.

If you’ve already rooted your NOOK Tablet, you can simply download and run an Android app to install ClockworkMod Recovery.

Once you’ve run the app and flashed CWM, you should be able to reboot your tablet into ClockworkMod.

OK, this is the easiest part of the tutorial. Just download the latest version of CM7 from the download link at the xda-developers forum and copy it to your NOOK Tablet.

You can either put it in your tablet’s built-in storage or on a microSD card. It doesn’t really matter.

If you’ve installed ClockworkMod using method 2, you an fire up the NOOK Tab recovery flasher app and choose the “Reboot Recovery” option.

If you used method 1, you’ll need to install ROM Manager or another app that gives you an option to reboot into recovery.

Either way, go ahead and do that now. Don’t worry, I’ll wait.

When you reboot into recovery your device will shut down and then load a white screen with a box in the center for a moment — and then a black screen with some blue text. That’s CWM.

OK, technically this step is optional, but I highly recommend it. This will let you go back to the stock B&N software any time you want. 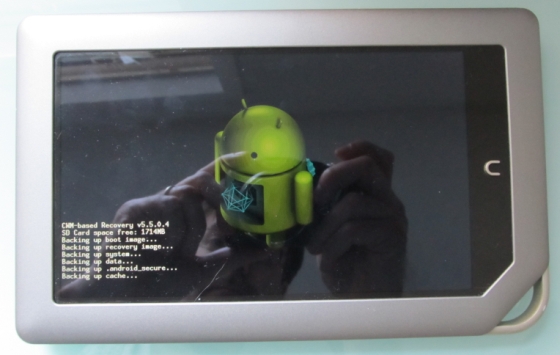 Now any time you want to restore your system to the backup you just created, you can fire up ClockworkMod and navigate to the backup and restore menu and choose the restore option instead of backup.

Now that your data is safe, it’s time to install CyanogenMod 7. It may be a good idea at this point to use the wipe data/factory reset option (if you have a backup, this is relatively safe). But you can also do it after completing the following steps. 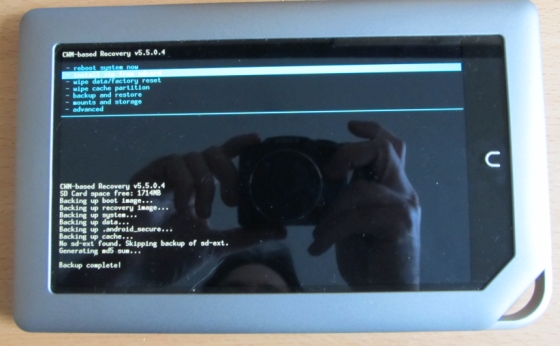 In fact, if you want to keep your settings intact, you may be able to get away without performing a factory reset at all, but that’s not really the recommended course.

6. Installing the Android Market and other Google apps

I’m going to go out on a limb here and assume that you want to be able to download apps from the Android Market, run Google Maps, Gmail, YouTube and other Google apps on the NOOK Tablet. In order to do that, you’ll need to download and install the latest gApps package for CyanogenMod.

To do that, just download the latest gApps package for CyanogenMod 7 from the CyanogenMod Wiki and copy the file to your SD card and then follow the above steps. But this time use gapps-gb-20110828-signed.zip or the latest version of gApps instead of CM-7NT-Alpha12_Public1.zip.

Now that you’ve installed ClockworkMod you can backup your CM7 installation for safe keeping and restore to the official B&N software if you like — or install other custom ROMs. 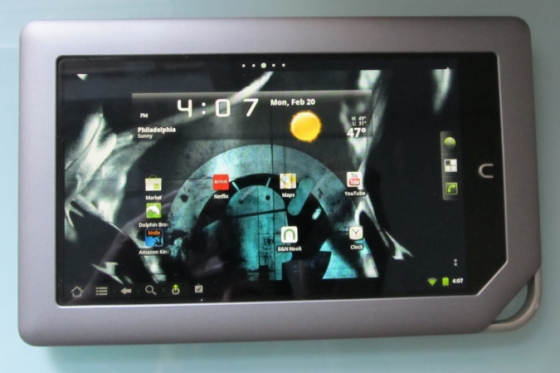 Eventually you’ll be able to use this same method to install CyanogenMod 9 or other software based on Android 4.0 on the NOOK Tablet. But right now CyanogenMod 7 Alpha with Android 2.3 is the most functional custom ROM available for this tablet.