An early build of Google Android 4.0 is now available for the Amazon Kindle Fire tablet. If you didn’t get the picture from our recent video, it’s still very much a work in progress. While developers have solved a bug affecting the “sdcard” portion of the device, there are still audio, video, and application bugs that need to be fixed.

Update 2/2/2012: There’s a new version with working audio, USB mounting support, and a number of other improvements.

Update 4/19/2012: A new kernel also adds hardware video acceleration, which means you can stream Netflix and other HD video content.

Update 7/12/2012: Now you can also install Android 4.1 Jelly Bean on the Kindle Fire! The steps below will show you how to do it, but grab the latest version of Android from the xda-developers forum.

Update 12/14/2012: There’s now an unofficial build of Android 4.2 Jelly Bean for the Kindle Fire. I recommend using the Kindle Fire Utility to install a custom recovery and then visiting the xda-developers forum for the latest Android 4.2 download links to get started.

But if you’ve already rooted your Kindle Fire and installed a custom recovery it’s actually pretty easy to take Android 4.0 Ice Cream Sandwich for a spin without much risk. You can always just revert to your previous software, whether that’s CyanogenMod 7 or Amazon’s stock software. 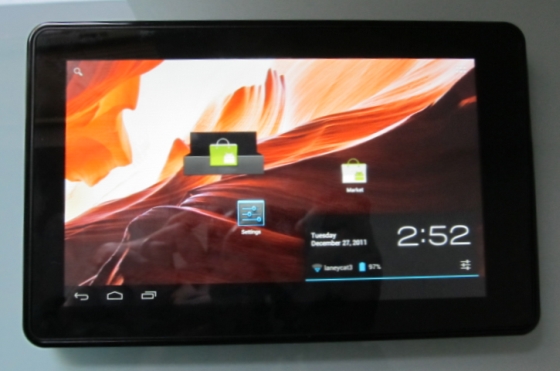 If you haven’t rooted the Kindle Fire or installed Team Win Recovery Project, we’ve got a guide for that. But be forewarned, it’s a kind of complicated process and there’s plenty of room for things to go wrong. While it’s tough to truly damage your Kindle Fire or leave it in an unbootable state, it’s pretty easy to leave it in a state that’s difficult to recover from without trying a half dozen different recovery techniques.

With that in mind, this guide is aimed at people that have already installed TWRP.

There’s an active development thread at the xda-developers forum where you can find the latest tools for installing Android 4.0 on the Kindle Fire. It’s likely that the download links will change as new builds are released with new features and improvements.

So make sure to download the latest files from xda-developers. As of 2/2/2012, that involves:

Once you’ve downloaded these files, copy them to your Kindle Fire’s storage by connecting your Fire to your PC with a USB cable, and dragging and dropping the files to your tablet. You can also simply download them all directly on your tablet using a web browser on your Kindle Fire.

If you put the files in a folder, make sure you know what folder they’re in.

1. Turn off your tablet by pressing and holding the power button and then selecting the on-screen option to shut down.

2. Press the power button to turn on the tablet.

3. As soon as you see the yellow triangle with a fire icon in the center, press-and-hold the power button until it glows orange instead of green. If you don’t see the yellow triangle then you probably don’t have the FireFireFire bootloader and TWRP 2.0 recovery installed. Check out our guide for using the Kindle Fire Utility to install those before proceeding. 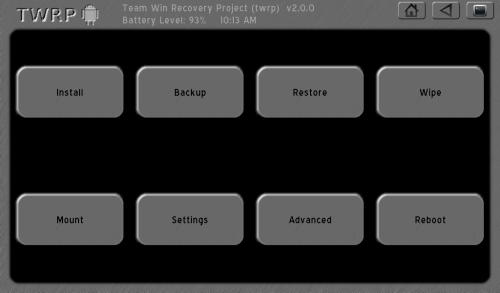 Before continuing it’s probably a good idea to backup your system. TWRP makes this easy to do, allowing you to restore your device to its current condition if you decide Android 4.0 isn’t for you yet. This is very likely, since the build that’s currently available is primarily designed for developers to test and improve.

1. Tap the button that says backup.

2. Select the items you want to backup. At a minimum this should probably include the System, Data, and Boot items. 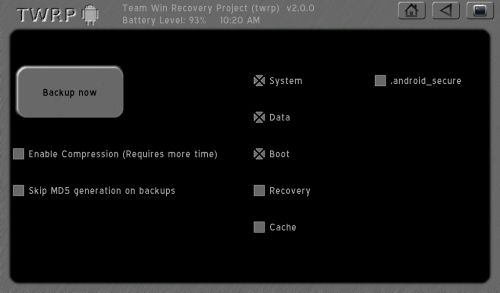 A progress meter should appear letting you know how things are going. You can also tap the terminal icon in the upper right corner to see a text description. 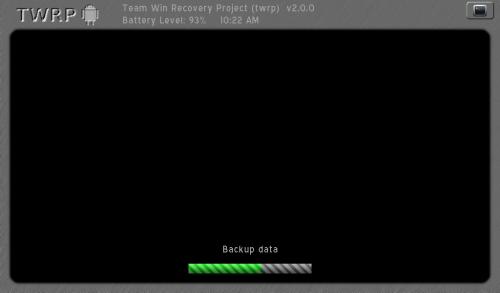 4. When the backup is complete, tap the button that says main menu to return to the home screen.

You can restore from this backup at any time by booting your device into TWRP and tapping the restore button on the home screen. Then choose the backup that you just made from the list.

By default, backups use the time and date you made them as their file names. You can also change the name to something more memorable without affecting the integrity of the backup.

1. Tap the Wipe icon in the upper right corner.

2. Choose the Factory Reset option. This won’t erase data stored on the sdcard partition, but it will clear your data, system, and other partitions.

3. You have one more chance to change your mind. Tap the Factory Reset button to continue. 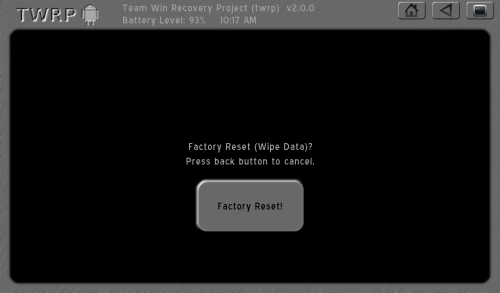 4. After the data is wiped, tap the back button to return to the previous screen.

5. From here you can tap the home icon or back arrow in the top right corner of the screen to return to the home screen.

1. Tap the Install button on the home screen.

2. If your files are in the root directory of your sdcard, you should see them in the box on the right. If not, use the file browser on the left to navigate to the folder where your files are located.

4. Tap the big button that says Flash to get started. 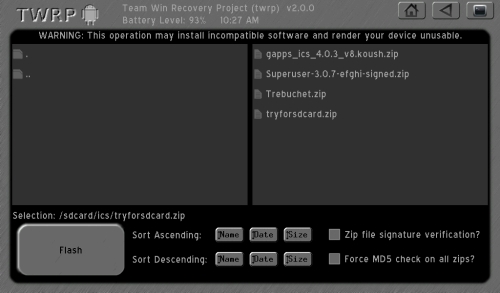 5. You’ll see text on the screen and a progress bar. Wait until the installation completes. You may see some error messages, but it’s safe to ignore most of these. 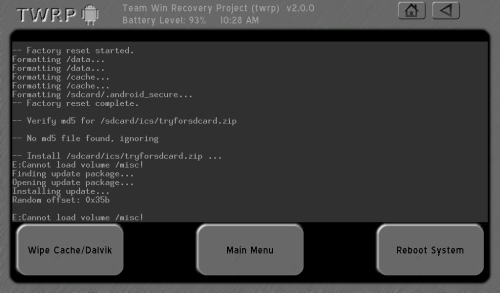 6. When the progress is complete you can tap the reboot button to boot into Android 4.0 — but if you want to install Google Apps and other files, hit the back arrow instead. You can also do this later if you prefer.

7. Choose the next file you want to install and repeat steps 3 through 5. I installed gApps first and then repeated the process with Trebuchet.

When you’ve finished installing all the zip files, it’s time to boot into Android 4.0.

1. You don’t necessarily need to do this, but it may be a good idea to hit the button that says Wipe Cache/Dalvik after installing the last zip file. This is probably more important if and when you decide to use TWRP to flash an update to existing software, but in this case we’re performing a fresh install. Hit the back button when you’re done wiping your cache. 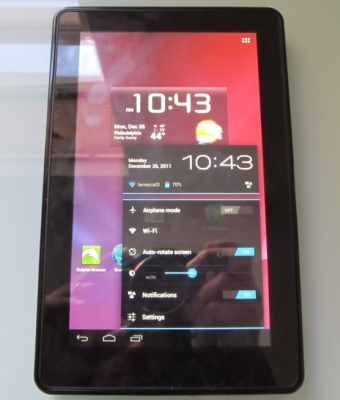 That’s pretty much it. Your device should now reboot and load Android 4.0.3 Ice Cream Sandwich. Follow the on-screen prompts to setup your device by enabling WiFi, logging into your Google account, and you should be good to go!

14 replies on “How to install Android 4.0 on the Kindle Fire”