Amazon’s Fire and Fire HD tablets ship with a fork of Google’s Android operating system called Fire OS. For the most part that means they have a custom user interface that’s designed to highlight Amazon apps and services. But it also means that instead of the Google Play Store, they ship with the Amazon Appstore featuring a more limited selection of apps and games.

But you can run most Android apps on a Fire tablet, even if they’re not available from Amazon’s storefront. One way is to install the Google Play Store. But another is just to enable installation of apps from unknown sources, which makes it possible to download and install Android apps downloaded from places other than Amazon or Google’s app stores. 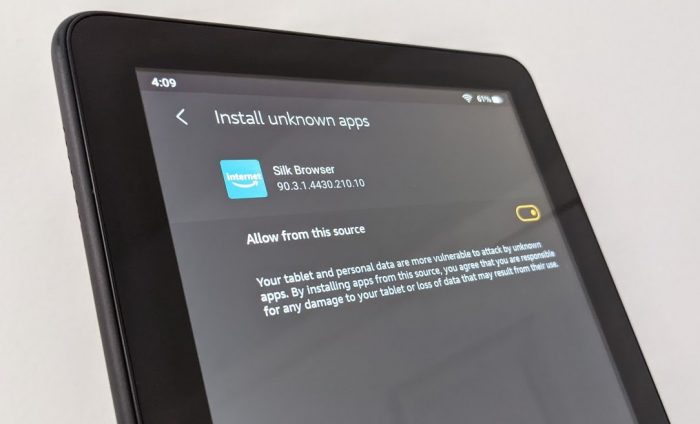 Before we begin, a note on what we mean by “unknown sources” or “unknown apps.” This is basically Google and Amazon’s way of referring to apps that don’t come from their own app stores, which means they haven’t been vetted by the companies in any way.

So you’ll want to make sure that you trust the source of the apps you’re installing. There are plenty of other places to find apps from outside of Google Play or the Amazon Appstore, some of which may be more trustworthy than others. So proceed with caution.

Installing apps in this way on mobile devices is often referred to as Sideloading, but it’s basically the same way you would install apps downloaded from the internet onto a Windows computer. So another phrase for sideloading is “installing software.”

Step 1: The first thing you’ll need to do is navigate to the Settings menu on your Fire tablet.

You can do this two ways: 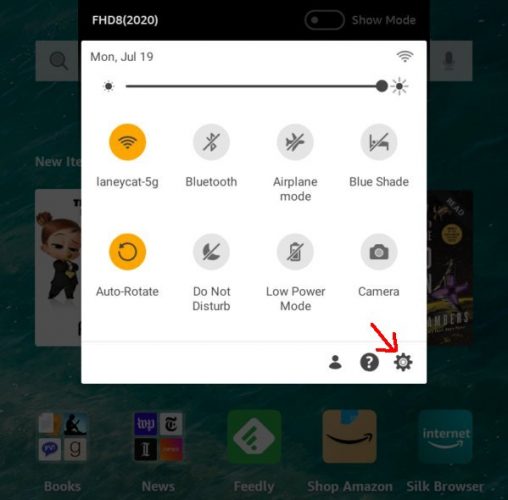 Step 2: From the Settings screen, look down until you see a section marked Security & Privacy and tap on that selection. 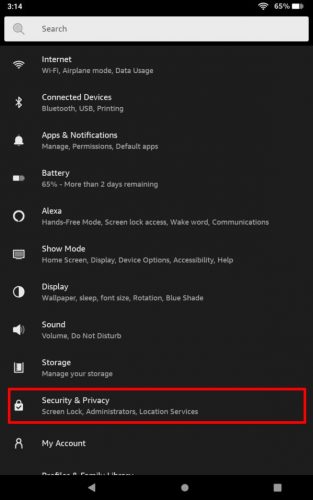 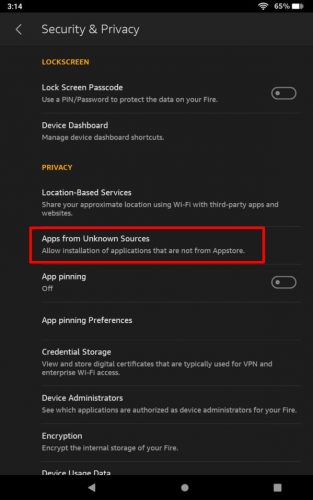 Step 4: On the next screen you’ll see a list of applications that have access to files downloaded to your tablet as well as an indication letting you know whether or not you can install apps from unknown sources using those applications.

For example, in the screenshot below you’ll see Amazon’s Silk web browser as well as Solid Explorer and Google Drive. Under each listing is “not allowed,” indicating that I cannot yet install apps from unknown sources using these applications. 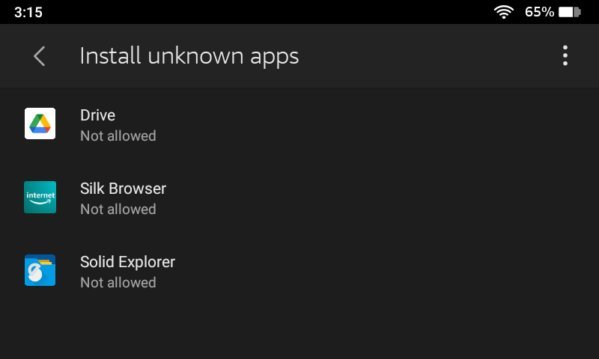 Silk is the default web browser that comes pre-installed on all Amazon tablets. Solid Explorer and Google Drive are only on my tablet because I’ve already installed Google Play and Google Play services. But what you see on this screen will vary depending on the apps installed on your tablet.

Tap the Silk browser if you want to be able to download Android apps from the web browser and then install them. If you’d rather use a different app, you can tap that instead.

Step 5: On the next screen you’ll see a toggle that lets you enable installation of “unknown apps” using this program. If the slider is to left, the toggle will be greyed out and you’ll be unable to install apps. Slide it to the right and it will change from grey to orange, indicating that you can install unknown apps. 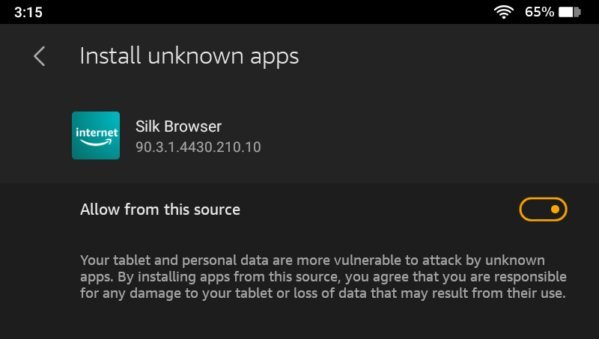 Step 6: That’s it. You should be able to download and install apps now. But if you want confirmation, you can go back to the previous screen either by using the back arrow in the Fire tablet’s navigation bar or by clicking the < icon at the top of the screen. Now instead of “not allowed,” the apps should say “allowed. 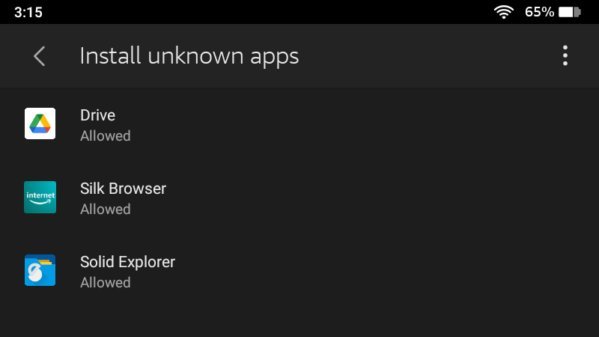 Now you can download apps from sources that you trust (or those you don’t, I suppose) and install them on your tablet.

Note that not all Android apps will necessarily work. Apps that rely on Google Play Services will only run properly if you install Google Play first. And if you try to install apps designed for specific devices like Samsung products, for example, they may not run. I couldn’t get the Samsung Voice Recorder app to work on my Fire tablet, for example.

But in order to install the latest version of the FBReader app for reading eBooks, all I had to do was:

Now you can tap “done” to close the installer dialog, choose “open” to open the app you just installed, or hit the Home button to return to the home screen and find the app that way.