The Barnes & Noble NOOK HD and HD+ were released in 2012, and the tablets offered high-resolution displays, dual-core processors, and microSD card slots, among other features. But they weren’t hugely successful for B&N, and the NOOK HD and HD+ were the last tablets the book store chain ever produced on its own.

So are the old NOOK HD and HD+ useless? Not exactly. They have aging hardware and software… but you can do something about the software.

I’m going to show you how I installed Android 5.1 Lollipop on my NOOK HD+ tablet. 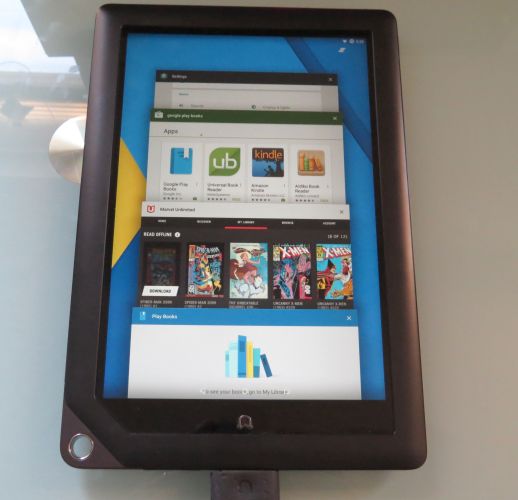 I picked up a NOOK HD+ tablet with a 9 inch, 1920 x 1280 pixel display a while back when I was looking for a tablet with a good display for reading digital comics, magazines, and other content that can be tough to view on a smaller screen. The tablet comes with a custom version of Android 4.0 Ice Cream Sandwich with tight integration with the NOOK app and book stores… but it also features the Google Play Store.

That means you can download the Amazon Kindle app, Comixology, Marvel Unlimited, or just about any other app available from Google’s app marketplace. I even installed the Nova Launcher app so I wouldn’t have to deal with the NOOK home screen and launcher.

But the tablet still felt kind of sluggish, the software kind of dates, and the user experience a bit inconsistent, since I was dealing with NOOK-style notifications and settings and Android-style apps.

So I decided to replace the stock software with an unofficial build of CyanogenMod 12.1, which is based on Android 5.1.

Before we get started, I should point out that these steps worked for me… they may not work for you. There is a chance that if something goes wrong, you may have a difficult time getting your tablet to do anything at all.

It should be possible to recover from most errors, but you may lose some data if you don’t back everything up before you begin. Just know that there’s a bit of risk involved.

This step is pretty simple… sort of.

First, download the correct version of ClockworkMod Recovery for your device from the first post in Verygreen’s thread at the xda-developers forum.

You want to click the links for “initial sdcard image” for the Ovation (NOOK HD+) or Hummingbird (NOOK HD) builds.

Next, you’ll want to unzip the sdcard image and write it to a microSD card that’s at least 1GB. Note that this will overwrite any data on the card, so make a backup of anything important.

If you’re using Windows, you can use the 7-zip archive manager to unzip the image and then use Win32diskimager to write the file to your SD card. When it’s done, there should be a couple of files and a bunch of blank space on the card. 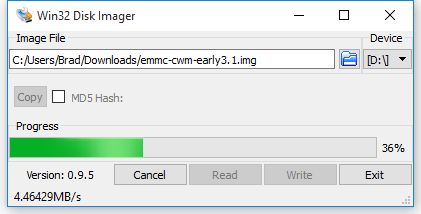 If you’re using Linux, you can use the gunzip command to unzip the file and the dd command to write it to the disk.

That’s kind of it. You should now have a microSD card that you can insert into the card reader of your tablet to boot into a custom recovery. You can use this to backup or restore your device or flash custom firmware. But before we go any further, we should probably get the rest of the stuff you’re going to need.

You’ve actually got a bunch of options here. There are a number of custom ROMs for NOOK HD/HD+ tablets based on a number of different versions of Android.

For this guide, I’m going to use the unofficial build of CyanogenMod 12.1 (Android 5.1) from xda-developers forum member amaces. But you can find a number of other versions of Android at the NOOK HD section of the forum.

Amaces posts the latest builds of CyanogenMod and TWRP recovery in a shared Box folder. Other developers will offer different download methods.

The files I used were cm-12.1-20150906-UNOFFICIAL-ovation.zip and twrp-2.8.7.4-ovation.zip. Once I downloded those ZIP files, I copied them to the root directory of the microSD card I had prepared. Make sure not to unzip the files.

Want the Google Play Store? Then you’ll also need to download a gApps package. There are plenty to choose from, but since I’m trying to install a light-weight version of Android on the tablet (which I primarily intend to use for reading), I went with jajb’s Google Apps Minimal Edition for Android 5.x.

Instead of loading a whole bunch of Google applications, this version basically gives you the Google Play Store, Google Contact Sync, and Google Play Services, and not much else. You can download any other apps you want from the Play Store, such as Chrome, Maps, or YouTube.

Like the CyanogenMod and TWRP files, I copied this to my SD card.

Booting from the SD card

Press and hold the power button to turn off the tablet. Insert the microSD card. And then turn the tablet on. 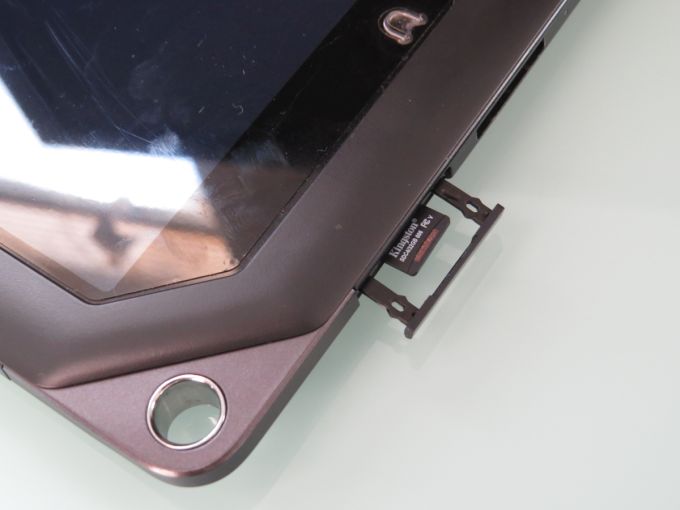 If everything works properly, you’ll see a logo that says Cyanoboot instead of the usual NOOK logo. 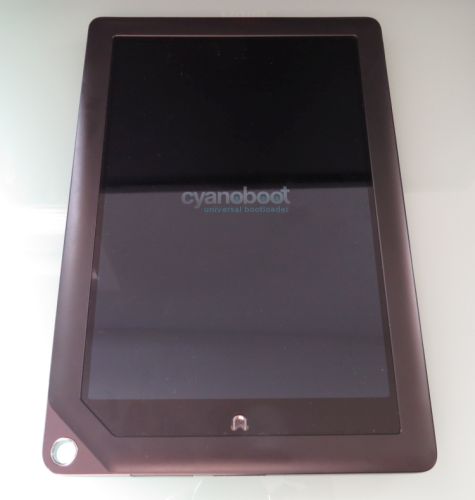 So I gave up on the video idea and sat down and kept rebooting the tablet over and over until I saw the Cyanoboot logo again.

Anyway, once that happened, I let things run the course and a moment later, ClockworkMod (CWM) Recovery loaded. 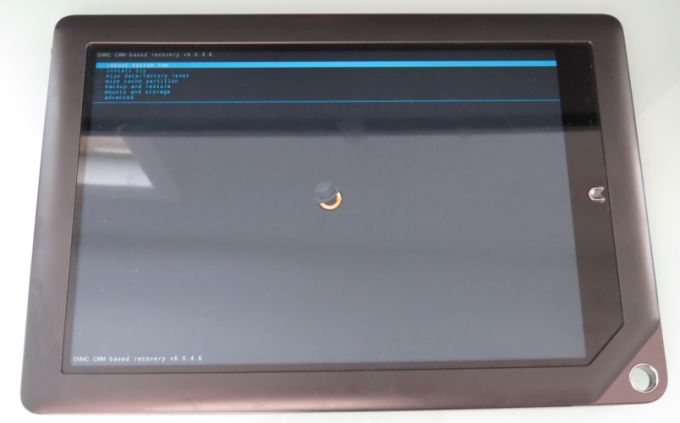 This utility lets you backup or restore your device, wipe data from your device, or install custom firmware, among other things. You can navigate through CWM using the following buttons:

There are a couple of ways you could proceed from here. You can do a “dirty” flash which means installing the new version of Android on top of the old one. This has the benefit of keeping all of your apps and settings. But it could also affect performance.

You can also do a factory reset and perform a clean install. I actually did a dirty flash first and then went back and used TWRP (a different tool that offers many of the same features as CWM) to do a factory reset. The tablet seems more responsive than it did after the dirty install. 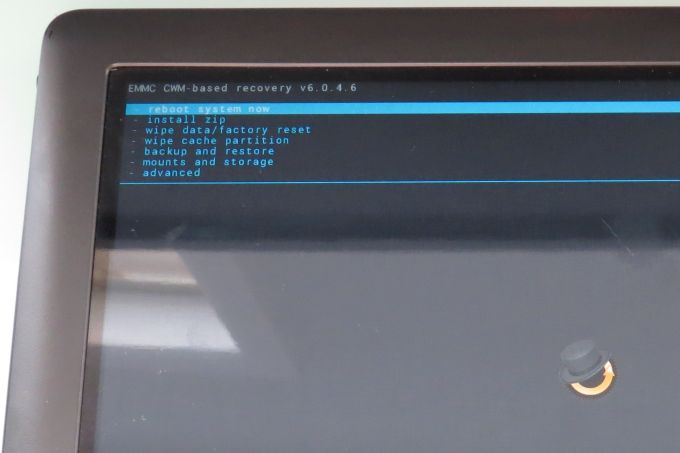 Anyway, it’s up to you to decide whether to do the factory reset or not, but I’ll walk you through the process of installing the new version of Android:

1. Scroll down to the “install zip” option and select it.

2. Scroll down to “choose zip from /external_sd and select that option. 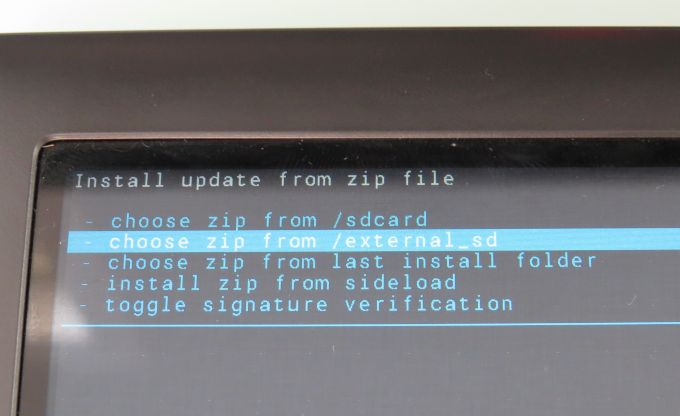 3. Choose the ZIP files you want to install, one at a time. I’d recommend going in this order: recovery, Android ROM, and then Google Apps. In my case I flashed TWRP, then CyanogenMod, then gApps. 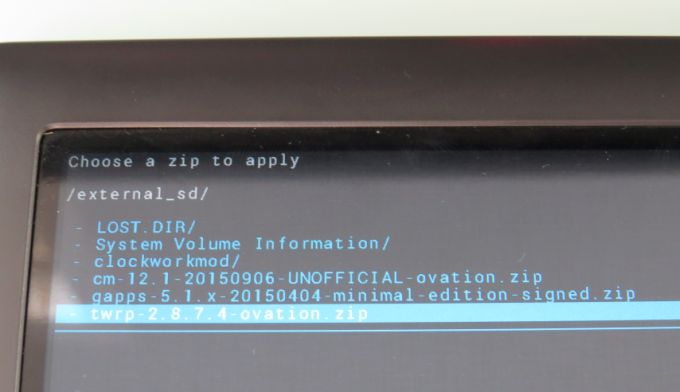 4. Once you select the ZIP to install, follow the on-screen instructions and choose “yes” to install each file. 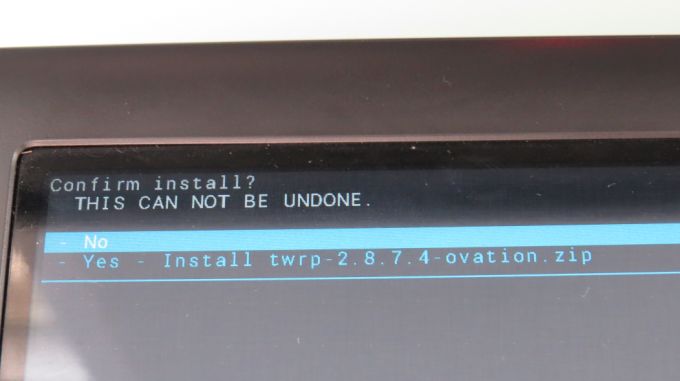 After installing all three files (technically gApps is optional, but you probably want it), use the Power button to go back to the main menu and choose “reboot system now.” 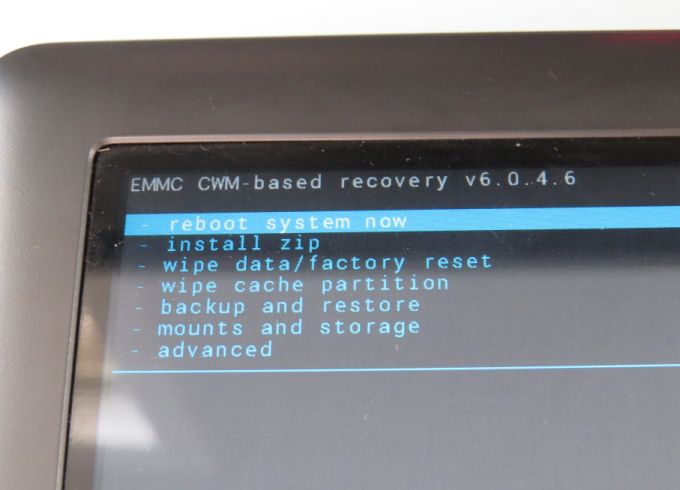 That’s it! We’re out of steps

The first time the tablet boots, it’ll take a very long time to finish. But after that, you can login with your Google account and begin to use your NOOK HD or NOOK HD+ as a normal Android tablet.

Want to read NOOK books? You can always download and install the NOOK app from the Google Play Store.

So is it worth the hassle? Maybe.

I bought a NOOK HD+ because I was looking for a cheap tablet with a great screen, but I started to get frustrated at how sluggish it felt. After replacing NOOK 2.1/Android 4.0 software with CyanogenMod 12.1, the tablet does feel more responsive.

There are other low-cost tablets with decent screens and newer processors on the market. So I’m not sure I’d recommend buying a NOOK HD or HD+ today with the intention of upgrading the operating system yourself. But if you already have one lying around, the DIY software upgrade might breath new life into it.

And if you are considering buying a NOOK HD/HD+ to tinker with, they’re pretty cheap these days. Used and refurbished models are often available for under $100.