The Amazon Kindle Fire ships with a custom version of Android 2.3 Gingerbread designed to run apps and access digital media from Amazon’s content store. But users have been hacking the Kindle Fire since the day it was released, convincing the $199 tablet to run a range of software including CyanogenMod 7, MIUI, and CyanogenMod 9 based on Android 4.0 Ice Cream Sandwich.

Update: There are now several different custom ROMs based on Android 4.1 for the Kindle Fire, including Jandycane,  Iced Jellybean, Alien Droid, and an SGT7 mod. 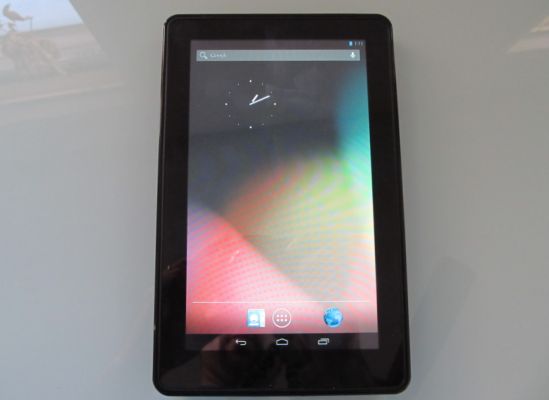 The first build doesn’t support hardware video acceleration, and it can be difficult to enable WiFi. But Hashcode expects to fix both of those problems very soon.

Update: As of 7/13/2012, WiFi, HD video, and virtually everything else that you probably care about are working.

Everything else seems to work nicely.

When running Android 4.1 based on Android Open Source Project code, the Kindle Fire uses the same 7 inch tablet user interface you get with the Google Nexus 7.

This is a sort of hybrid between the Android 4.0 smartphone and tablet user interfaces, with the home screen locked in portrait mode and the notification bar at the top of the screen instead of the bottom.

Honestly, at this point there’s almost nothing you can do with a Kindle Fire that you can’t also do with a $199 Google Nexus 7 by simply installing the Amazon Appstore, Amazon MP3, and Kindle apps. And the Nexus 7 has a higher resolution display and comes with Android 4.1 preloaded. Google’s tablet also has a built=in microphone, which you’ll need for voice commands and speech-to-text.

On the other hand, used Kindle Fire tablets sell for around $170

, and if you already have a Kindle Fire, it’s pretty awesome that you can update the software for free — even if Amazon doesn’t officially support this particular update.

In order to install Android 4.1 on the Kindle Fire, you’ll need to root the tablet and install a custom recovery. You can do both of those things by downloading and running the latest version of the Kindle Fire Utility from the xda-developers forum.

Note that while it’s pretty difficult to turn a Kindle Fire into a brick while applying this sort of software update, it is possible to get stuck in fastboot mode or encounter other problems that can be tricky to get out of. Your results may vary, and Liliputing takes no responsibility if anything goes wrong — so proceed with caution (and keep the troubleshooting guide in our article on Rooting the Kindle Fire handy).

You can find a more detailed walkthrough for installing a custom ROM in our post on installing Android 4.0 on the Kindle Fire, but here are the highlights:

Once you’ve downloaded the file to a Windows PC, unzip it to a directory on your computer and double-click the install_drivers.bat file. After that’s complete, plug your Kindle Fire into your computer with a USB cable and wait for the computer to recognize the device.

Next click the run.bat file and follow the on-screen instructions to first install permanent root on your Kindle Fire, and then install TWRP or ClockworkMod Recovery (I’d recommend TWRP). You’ll also want to install the latest FireFireFire utility — as this is what lets you boot into recovery mode.

Once that’s done you can download Hashcode’s latest Android 4.1 Jelly Bean .zip file to your device, as well as the latest gApps.zip file (which contains the Play Store, Gmail, and other Google apps) to your device.

You’ll probably want to use the latest Jelly Bean gApps file, dated 7/11/2012 or later. Earlier versions may not work properly. For instance, earlier versions of the Google Play Store close as soon as you try to open them, or have difficulty installing apps.

Next, power down your tablet, then hit the power button again to start it up. When you see the boot logo, press and hold the power button for 5-10 seconds. This should tell FireFireFire to boot into TWRP instead of loading Android.

From there, you can use the on-screen commands to backup your device (highly recommended), wipe your device (not a bad idea — assuming you’ve made a backup), and flash Jelly Bean and the latest gApps. 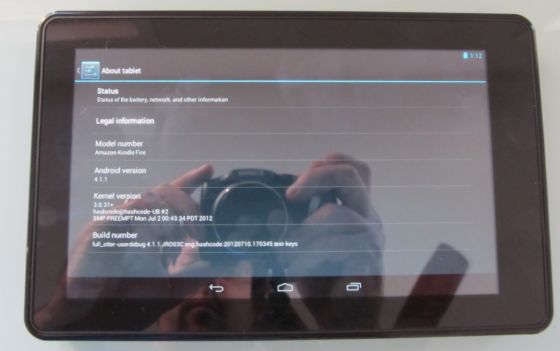 When you reboot your device you should be running Android 4.1.

If WiFi isn’t working, you may need to install a different version of SU an the SuperUser app. You can download the latest builds from from AndroidSU.com, copy them to your Kindle Fire, and use TWRP or ClockworkMod to flash them like you would a custom ROM or gApps package.

Then you’ll need to connect your Kindle Fire to a PC with a USB cable, open a command prompt, navigate to a directory where you have adb (the tools directory from Kindle Fire Utility should work), and type the following commands:

If the adb shell command doesn’t work, try unplugging your Kindle and plugging it in again. You can also try double-clicking the install_drivers.bat file again, which helped me. Or you could just wait for Hashcode to incorporate the WiFi fix into a future build.

89 replies on “How to install Android 4.1 Jelly Bean on the Kindle Fire”