Google’s Chrome OS is designed to be a relatively secure, simple operating system that’s easy to use and hard to mess up. But you can run stable channel, beta channel, or dev channel software on any Chromebook depending on whether you want the safest experience or buggy, bleeding-edge features.

There’s also an option called Developer Mode, which is different from the dev channel. It allows you to access files and settings that are normally protected and use a command shell to explore the system. It’s designed for developers and advanced users only, since it increases the chances that you’ll break your Chromebook. But enabling Developer Mode is also a prerequisite for using one my favorite Chrome OS hacks: a tool called Crouton that allows you to install Ubuntu or another GNU/Linux distribution and run it alongside Chrome OS.

Google offers instructions for enabling Developer Mode for most Chromebooks, and for the most part the first step is to press and hold the Esc, Refresh, and Power buttons at the same time. But if you’re using a Chrome OS tablet that doesn’t have a physical keyboard, then you don’t have an Esc or refresh key.

Fortunately it’s still pretty easy to switch to Developer Mode on a tablet-only device like the Acer Chromebook Tab 10. 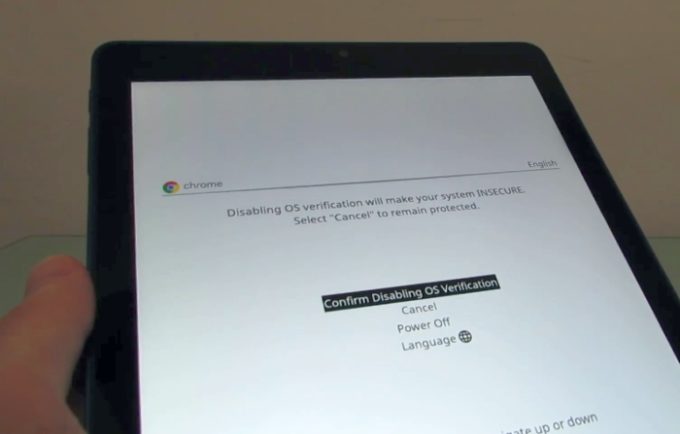 Here’s how to do it… but keep in mind that the following steps will delete all data from your device, so make sure to backup any important files before you begin. Your Chrome apps and settings should be restored when you login to your account again.

Anyway, enough with the warnings. On with the show:

That’s pretty much it. You can reboot the device and the tablet will set up Developer Mode and then prompt you to go through the Chrome OS setup process. Or you can go into the Developer Options and choose the “Boot from Internal Disk” option to do it without rebooting first.

Note that it’ll take a few minutes for the tablet to enable developer mode for the first time, and once that’s done you’ll see a scary menu letting you know that OS Verification is Disabled any time you reboot the tablet. If you have a Chromebook with a keyboard, you can bypass this by hitting Ctrl+D. On a tablet without a keyboard you have two options: 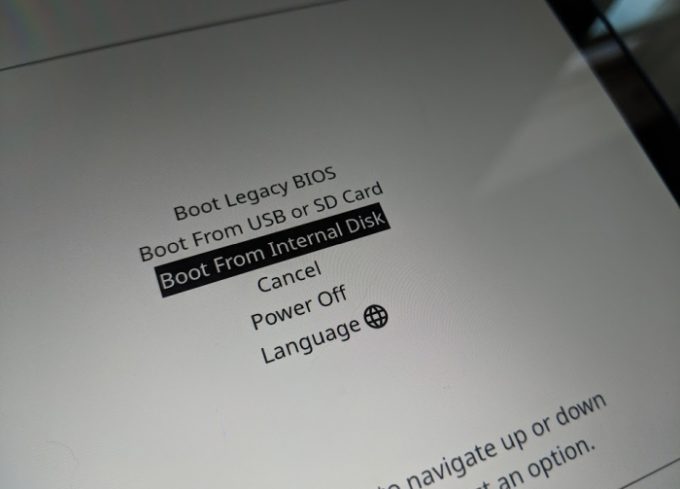 If you typically put your Chromebook or tablet to sleep rather than shutting it all the way down, you probably won’t see the boot menu very often anyway.

Want to re-enable OS verification and disable Developer Mode? You can repeat steps 1-7, above, but instead of “Confirm Disabling OS Verification” you should see an option that says “Enable OS Verification.” 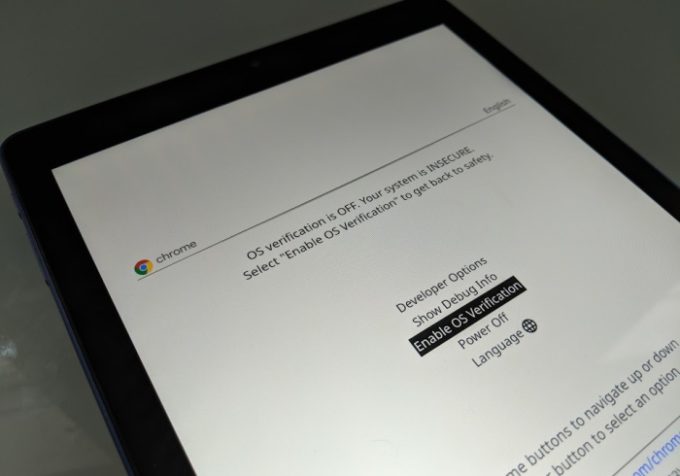 Choose it and the Chrome OS device will erase your data, prepare verification, and take you through the setup process again as if you were using a new device.

Oh, and as for using Crouton to install Linux? You can do it, but it’s probably not the simplest way to run Linux applications on the Acer Chromebook Tab 10… at least not for now.

Switching to developer channel gives you the option of using Google’s Crostini feature to install a Linux virtual machine that lets you install desktop applications like LibreOffice and GIMP and launch them from the same app launcher you use to load Android and Chrome OS apps. It’s definitely a work-in-progress and not all apps are available and some that are don’t seem to be optimized for this device. But it’s relatively painless to try.

Crouton, on the other hand, allows you to load a full-fledged Linux desktop environment such as GNOME or Xfce. I took Xfce for a spin and immediately encountered a few problems.

First, the screen resolution seems to be stuck at 2048 x 1536, which makes everything look very sharp… but very tiny.

Second, automatic screen rotation doesn’t work so you’re kind of stuck in portrait mode. You can open the display settings and manually rotate the screen to the left or right, but then the touchscreen will become nearly unusable. It still thinks you’re in portrait orientation even when you’re in landscape… so in order to move the on-screen cursor you have to move your finger or the Wacom pen up or down to make the cursor move left or right. It’s tedious and kind of painful.

Also, the way you would normally switch back and forth between the Crouton/chroot/Ubuntu environment and Chrome OS is to press Ctrl+Alt+Shift+Back or Ctrl+Alt+Shift+Forward. But if you don’t have a Chrome OS specific keyboard with support for those keys, the only way to exit Ubuntu is to logout and return to Chrome OS.

That said, Ubuntu 16.04 with Xfce worked pretty nicely in portrait mode for me, and I had no problems installing Firefox, GIMP, and LibreOffice. So if you’re not impressed with the way Linux apps run in containers in Chrome OS 69 and later, then Crouton is certainly a nifty tool that lets you get more done on a Chromebook. I’m just not convinced that it’s a very tablet-friendly solution out-of-the-box… at least not yet.

Update: One possible workaround is to install the official Crouton Chrome extension and use the xiwi target when installing Linux. For example, “sudo install -Dt /usr/local/bin -m 755 ~/Downloads/crouton -t gnome-desktop,xiwi” would install Ubuntu with the GNOME Desktop Environment in such a way that the operating system would essentially run a browser tab, allowing you to minimize the window and return to Chrome OS. Then you can return to Ubuntu by tapping the Crouton icon in a Chrome window and tapping the appropriate option (in my case, it was “xenial,” because I installed Ubuntu 16.04 Xenial Xerus).

You can also switch between Chrome OS and Ubuntu using the task switcher app in Chrome OS. The experience isn’t entirely intuitive, and if you do use a keyboard, some actions like Alt+Tab will show you all the apps and windows open in Chrome OS including your Ubuntu window rather than just the apps running in Ubuntu. But using the crouton extension and xiwi to run Ubuntu in a browser tab is a little more touchscreen-friendly than running it as a separate desktop.