The Google Nexus 7 may be the first tablet to ship with Google Android 4.1 Jelly Bean. But like Android 4.0, Jelly Bean has slightly different user interfaces for smartphones and tablets — and for some reason Google decided to make the smartphone UI the default on the Nexus 7 tablet.

If you’d rather use the tablet view, there’s a hack for that. 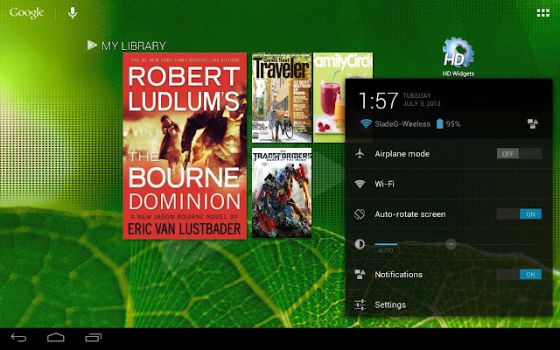 Xda-developers forum member SladeNoctis discovered that if you change the LCD density property in the build.prop file, you can switch to the tablet view. This move the notification bar from the top of the screen to the lower right corner and tweaks the layout of the home screen and navigation toolbar.

You’ll need a rooted device in order to access the build.prop file, but the tablet is fairly easy to root. Once you’ve done that, you can follow the instructions provided by SladeNoctis to edit your build.prop file or use a tool like LCD Density Modder or ROM Toolbox which makes the process a little simpler and helps fix some of the problems associated with this sort of change.

Note that in addition to enabling tablet mode, changing the LCD density could lead text or pictures to look smaller. Some apps may also look funny.