The Barnes & Noble NOOK Tablet ships with a custom version of Google Android designed to let you download books, periodicals, and apps from the B&N Store. But hackers have been installing other versions of Android for months, allowing you to install Google’s digital content store and tweak everything from the tablet’s home screen to the on-screen keyboard.

We’ve seen CyanogenMod 7 and MIUI 2.2.3 ported to the tablet, allowing you to replace the Barnes & Noble software with custom versions of Android 2.3. We’ve seen an early build of CyanogenMod 9 which brings Android 4.0 to the tablet.

But up until recently, the easiest way to run alternate operating systems on the NOOK Tablet was to root the device, load a custom recovery application such as ClockworkMod and then wipe the software that comes with the tablet and replace is. 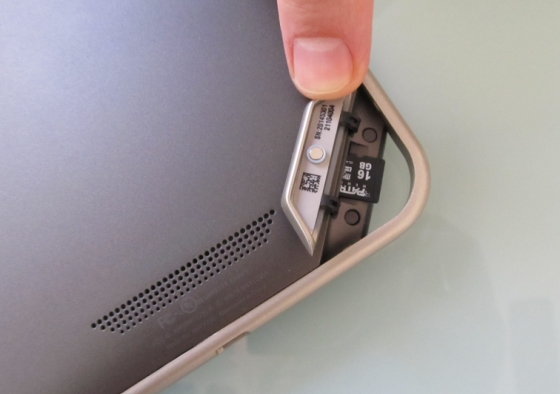 Now there’s a way to boot CyanogenMod 7 from a microSD card — no rooting required. That means you can pop a microSD card in your tablet, hit the power button and boot into CM7. Turn off your tablet and take out the microSD card and you’ll return to the standard Barnes & Noble experience.

People have been doing something similar with the NOOK Color since Barnes & Noble released its first Android-powered color eReader in 2010.

Xda-developers forum member CelticWebSolutions is responsible for bootable SD card image used in this guide.He’s the same guy who first brought us a version of CyanogenMod 7 that could be installed on the NOOK Tablet’s internal storage.

This method for booting CyanogenMod 7 should work with the original 16GB NOOK Tablet or the cheaper 8GB model. It will not work on a NOOK Color or any other phone or tablet.

You’ll need a 4GB or larger microSD card to get started. This tutorial assumes you’re running Windows. If you’re using Linux or OS X, you can find details for writing the disk image to your card at the xda-developers forum.

You can find the link for the SD Version Image at the xda-developers forum.  Because this file and file location may change, I’m not providing a direct link here. You should visit the forum for the latest version

Next we’ll download the tool that you use to take that disk image and imprint it on your microSD card.

Again, this file is zipped. Go ahead and unzip it and you should find a number of files including one called Win32DiskImager.exe. 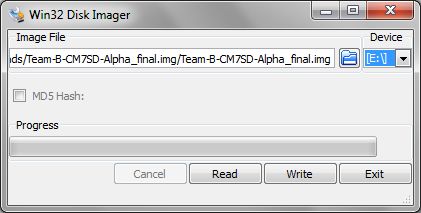 Make sure your microSD card is plugged into your Windows computer in a card reader and then go ahead and click Win32DiskImager.exe.

The drive letter for your microSD card should appear in the box on the top right. If it doesn’t then you may need to close the program and right-click on it and try running as an administrator or in compatibility mode.

The first time I tried using the disk imager I had no problems just clicking on it. The second time it wouldn’t recognize my flash card until I tried running in compatibility mode.

Next click the little folder icon to open an explorer window and locate and select the Team-B-CM7SD-Alpha_final.img file.

Click the Write button and wait for the progress bar to finish.

Note that this will create a 4GB disk image. If you have a larger SD card it won’t automatically be recognized, but you may be able to resize the “sdcard” partition later to gain additional space if you have a microSD card with more than 4GB of space.

You may also find that some 4GB SD cards don’t have enough space for this image. I wound up having to use my 16GB card because Win32 Disk Imager told me my 4GB card was too small.

4. Boot from the microSD card

Now all you have to do is pop the card out of your PC, power down your NOOK Tablet, insert the card and turn the tablet back on.

If all goes according to plan, you should boot into CyanogenMod 7 instead of the Barnes & Noble version of Android.

To switch back, just power down your tablet, remove the flash card, and turn it back on again.

If you’ve started poking around CyanogenMod 7 you may have noticed that there’s no app store included out of the box. For legal reasons, CyanogenMod doesn’t preload the Android Market (or Google Play Store, or whatever it’s called these days).

But you can install it quite easily.

Now when you boot into Android you should have the Android Market icon. Go ahead and fire it up and sign in with your Google account to get a one-time menu showing a list of Google applications available for installation including Gmail, Google Maps, and YouTube.

95 replies on “How to dual-boot CyanogenMod 7, NOOK Tablet OS with a microSD card”