The Google Nexus 7 tablet has a user interface that looks like a cross between the Google Android UI for smartphones and tablets. With Android 3.0 through Android 4.0, things were pretty clear-cut: If you had a phone, the notification area was at the top of the screen and you couldn’t rotate the home screen. On tablets, it was at the bottom and rotation was supported.

But Android 4.1 on the Nexus 7 includes a notification area at the top of the device, home, back, and recent apps buttons at the bottom, and a default home screen that doesn’t rotate. It’s a 7 inch tablet that works more like a phone — unless you apply a patch that makes it work like a 10 inch tablet. 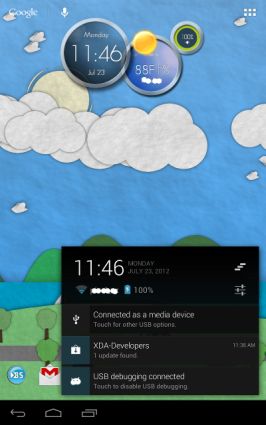 Google still supports the same full tablet mode we saw in Android 4.0 and earlier, but only for tablets with larger displays. The new user interface we see on the Nexus 7 is designed specifically for 7 inch tablets.

When you run some apps you’ll see the two-pane view that you get with 10 inch tablets, but overall the user interface looks more like the one you’d expect for a phone. It’s not a bad way to do things — but if it’s now what you’re looking for, there are other options.

The operating system doesn’t actually know what size your screen is. It just knows how many pixels your screen can display, what the pixel density is, and what the cutoff is for showing the 7 or 10 inch versions of the Android interface. So there are a few ways to trick the Nexus 7 into thinking it should display the notification bar at the bottom.

If all you want is a home screen that can rotate, you can install any number of apps from the Play Store, including Nova Launcher, ADW Launcher, or Apex Launcher.

But if you want to use the full tablet UI, you’ll need to root your Nexus 7 and make some changes.

This is the easiest way to enable the tablet UI (for now). Once you’ve rooted your tablet, just install an app such as ROM Toolbox that allows you to change your LCD density. You can find that option in the build.prop Tweaks section of ROM Toolbox.

The default setting for the Nexus 7 is 213. But if you change it to something between 160 and 170, the tablet should automatically display the full Android user interface. 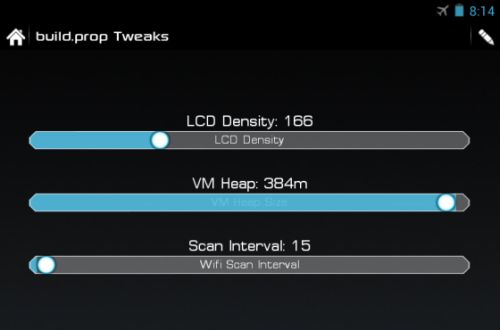 Unfortunately there’s a down side to this method. The Nexus 7 has a 1280 x 800 pixel display. Normally that just means text, images, and other content will look less pixelated on the tablet than on a Kindle Fire or another 7 inch tablet with a 1024 x 600 pixel screen. But if you change the LCD density, text, images, and other content will look smaller on the Nexus 7 as well.

Basically what you’re trying to do is cram all the content that would normally be displayed on a 10 inch screen onto a 7 inch screen. If you have great eyesight or like holding tablets very close to your face, this might be a good thing. If not, you might be interested in the second option.

A group of folks at the xda-developers forum found a setting in the Android 4.1 code called ShortSizeDP. Basically this tells the operating system whether to use the phone, 7 inch tablet, or larger tablet user interface depending on your screen resolution and LCD density.

If you change the ShortSizeDP, you can get the full tablet user interface without making all the text and graphics smaller.

So they’ve posted a True Tablet UI Patch that lets you do that.

It’s still a work in progress and only works if you’re running a deodexed version of Android 4.1 on your Nexus 7. Eventually the plan is to release a version that makes it easy to switch between full tablet and 7 inch tablet modes, so if that’s what you’re looking for you might want to keep your eye on the xda-developers forum thread and wait.

For now, just make sure to use ClockworkMod Recovery or TWRP to backup your device before applying the patch — that way you can always restore from the backup if you’re not happy with the results.