Google’s Android operating system has built-in support for dozens of different languages, which makes switching the text of menus, notifications, and other items from Chinese to English, French, or other common languages pretty simple.

But it’s always easiest if you already know how to speak (or read) the language you’re starting with. If you buy a Chinese tablet, for instance, and it arrives with Chinese as default language, it can be pretty tough to figure out how to change everything to English — unless you know where to look.

Then it’s pretty easy. Here’s how to change the system language of an Android device, even if you don’t speak the default language. 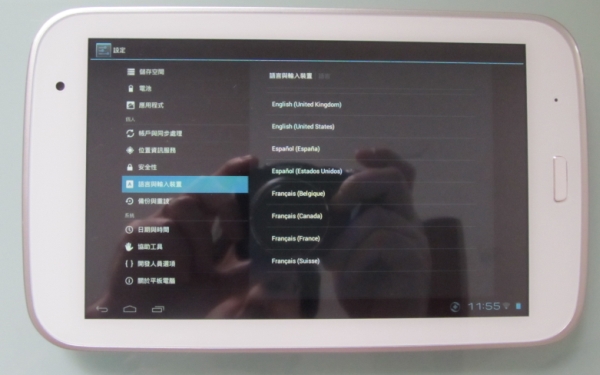 1. The first thing you need to do is open up the settings menu. To do this, just open the quick settings/notification menu — on Android 4.0 or 4.1, that will be at the bottom right corner of the screen. If you’re using Android 4.2, you can swipe down from the upper right corner  or the screen.

2. Next, look for a settings icon. It should look like three bars with small ovals intersecting them:

Go ahead and tap it to bring up the Android settings panel.

3. From here, you should see a list of icons on the left side of the screen, followed by text (which may be incomprehensible). Look fot the Languages & input icon which looks like an A in a white box:

Tap that menu option to bring up the Languages & Input menu.

4. From the following menu, choose the very top option. It doesn’t matter if you can understand the text or not — it says “language.”

5. The following menu should show a list of languages, each as it’s described in that country. For instance, English is written as “English,” but German is “Deutsch.”

In other words, it should be very easy to find the language you understand — just look for it from the list of options and it should be immediately legible.

6. Once you tap your language option, the system language should change and you should be able to understand the rest of the system menus.

Note that if you’re using a tablet imported from China or another country, you may still encounter some apps which don’t include translations for your native tongue — so those apps may be difficult to use. But for the most part, the steps above will effectively turn a Chinese Android tablet into an English one.

Note: Even if you purchase a tablet that’s been imported from China and it does ship with English as the default language, there’s a chance that if you ever perform a factory reset the system language will revert to Chinese. That’s because some retailers seem to manually change the language before shipping tablets to the US.

35 replies on “How to change the language on Android tablets (Chinese -> English, etc)”