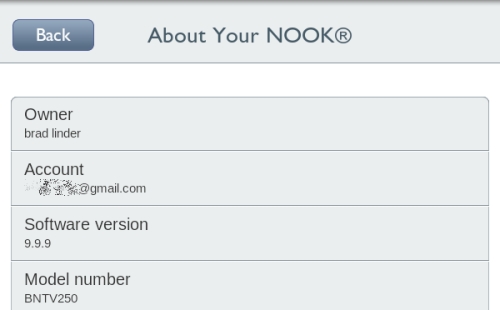 The company started to push out the new software this week, and not only does it kill root access, it also makes it impossible (or at least very difficult) to install third-party apps that haven’t been downloaded from the B&N Shop.

Fortunately there’s a way to keep your tablet on software version 1.4 and avoid the update — and it doesn’t involve disabling the WiFi on your tablet and refusing to ever go online again.

Update 12/29/2011: It’s also now possible to upgrade to OS 1.4.1 while rooting the tablet — but the steps are a little complicated. It might be easier to block OTA updates for now until there’s an easier method available.

NOOK Tablet hacker Indirect has posted a modified version of the NOOK Tablet Device Manager Service which prevents a tablet from automatically checking for updates and installing them.

Here’s how to use it.

You’ll need a rooted NOOK Tablet which is running OS version 1.4. You can follow our step-by-step instructions for rooting the device.

Rooting an Android device grants you access to files and settings that would otherwise be hidden and/or inaccessible. If you want to delete or change system files, you need root access.

That second option could come in handy if you haven’t installed the Android Market — or if you’re scared to turn on WiFi and risk downloading the 1.4.1 update before you’re done.

If you download the APK manually, you can copy it to your NOOK Tablet by connecting the tablet to your computer with a USB cable. It should show up on your PC as a USB mass storage device. You an then manually copy the APK to your tablet, unplug your tablet, and then use a file browser such as ES File Explorer on your tablet to locate the Titanium Backup APK and tap it to install the utility.

Make sure to run Titanium Backup at least once before continuing. This will grant the app root privileges and create a backup folder on your SD card.

Titanium Backup allows you to backup or restore applications. What we’re going to do in a minute is replace the DeviceManagerService app with a modified version. If you want to be able to revert to the original without performing a factory reset it might be a good idea to make a backup.

Here’s how to do that: 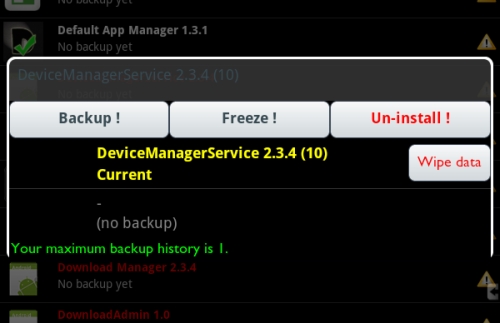 This will save a few files in the TitaniumBackup directory on your microSD card. In order to replace the original app we’re going to need to put the new files from Indirect in that directory. So you probably want to copy these files to a different folder on your tablet or copy them to your PC for safe keeping.

It’s also a good idea to force stop TitaniumBackup after removing the DeviceManagerSerivce backup files from the backup directory. If you have access to the Android app manager (You can get there by installing AnyCut and creating a shortcut directly to the Applications menu), this is easy to do. If not, you can always just reboot your NOOK Tablet before continuing.

Now download the modified DeviceManagerService 2.3.4 from the link at the xda-developers forum.

Now all we have to do is fire up TitaniumBackup, scroll down to DeviceManagerService and tap that app. 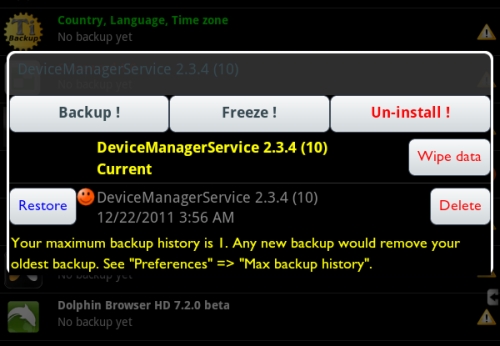 This time you should see that there’s already one backup available for this device. Instead of pressing the backup option, this time we’re going to choose the restore option. 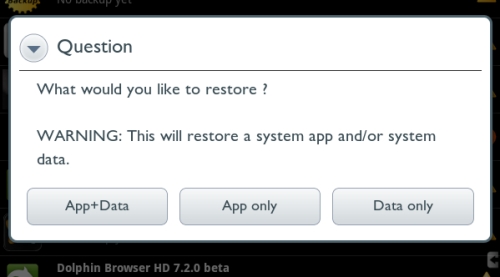 A screen will pop up asking if you’d like to replace the app, data, or both. Choose App+Data.

Next there will be a warning letting you know that you’re replacing a system application. Tap the OK box to proceed and TitaniumBackup will do the rest.

You can make sure everything worked by going to your NOOK Settings, choosing the Device Info option, and then “About your NOOK” and checking the software version.

If everything went according to plan you won’t see 1.4.0 anymore. Instead you should see Software version 9.9.9.

Now it should be safe to use WiFi again without fear of downloading a software update that will remove your root access.

There is a way back

Bear in mind, you may want a future software update from Barnes & Noble if it offers new features and/or doesn’t affect root access. You may also want to restore your tablet to factory default conditions to return it, sell it, or give it away.

If you followed step 3 and made a backup of your original DeviceServicesManager you should be able to delete the modified version from your TitaniumBackup folder, place the original files in that folder, and repeat step 5 to restore the original.

Your tablet will now be able to download and install over-the-air software updates.

There’s also an easy way to force a NOOK Tablet to perform a full factory reset.

This should force your tablet to restore itself to factory conditions. You can also use this method to downgrade from NOOK Tablet 1.4.1 software to version 1.4.0 if you decide you need root access or the ability to sideload third party apps.