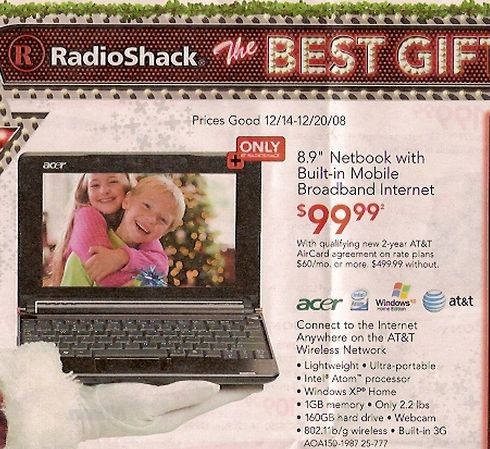 Late last year Radio Shack, Acer, and AT&T teamed up to offer customers a chance to pick up an Aspire One netbook for $99 when they sign up for a 2 year wireless broadband service contract. This sort of deal is common in Europe and other parts of the world, but kind of new in the US. So while customers are used to dealing with monthly bandwidth caps on their cellphone data plans (after all, what are the odds that you’re really going to do 5GB of surfing on a phone with a 2 inch display anyway), customers aren’t as used to the idea of having restrictive bandwidth caps on their computer usage.

And so we have the case of Billie Parks, a woman who picked up an Acer Aspire One from Radio Shack, signed up for the AT&T service plan, and promptly started using her netbook. A lot. She expected her first monthly bill to be around $96 dollars, to cover the $60 service charge and $36 activation fee. But instead she got a bill for about $5,000.

AT&T’s terms of service states that the company can impose additional fees if users exceed their 5GB monthly bandwidth cap. But it’s buried in the fine print, and Parks’s attorney states in a lawsuit filed this week that there’s nothing indicating that the fee could reach into the thousands of dollars.

The lawsuit could eventually reach class action status. My guess is that there’ll be some sort of settlement. Although parks probably did rack up enough minutes online to earn herself this astronomical bill, it shouldn’t be that hard for AT&T to wave some portion of the charges and agree to state its fees more clearly in the future. In a perfect world, this kind of lawsuit would lead to higher bandwidth caps. But unfortunately we don’t live in a perfect world.