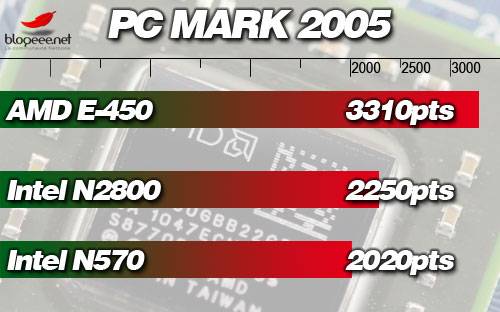 This week AMD introduced a number of new low power Fusion processors including the AMD E-450 which is a little faster than the E-350 chip that’s been shipping since last year. But how does it stack up against other low power processors?

AMD’s new chip comes out on top in overall performance and graphics tests — but the difference is far great in the graphics benchmarks. The PCMark2005 performance test shows the E-450 in the lead with 3310 points to the N2800’s 2250 points and N570’s 2020 points.

Interestingly, it looks like Intel’s Cedar Trail processors will offer big graphics improvements over earlier chips and overall performance that’s a little better. But it’s not surprising that AMD’s processor comes out ahead. While it’s a low-power chip compared with conventional laptop chips, it uses 18W of power while Intel’s processors use as little as 6.5W.

Despite the higher power consumption, AMD says laptops with E-450 chips should be able to get around 10 hours of battery life.

While Blogee doesn’t have benchmark results for AMD’s older E-350 chip, I’ve run the 3DMark06 test on a few different netbooks with that processor and results typically hover around the 2220 mark. So it looks like we should expect a bit of a graphics boost with the new AMD E-450 chip.