Podcasting has been around for more than a decade, but it’s really taken off in recent years with the success of shows like Serial, the launch of new podcast networks including Gimlet, Panoply, and Radiotopia, and many independent productions.

I’ve been a fan of (some) podcasts for a long time, but I’ve been thinking a lot about the way people listen recently for a few reasons. First, Google is finally getting in on the action with the addition of Podcasts to Play Music. And second, you may have noticed that I recently launched a podcast of my own.

So I was wondering… if you’re a podcast fan, what tools do you use to find and listen to shows?

The image above shows download stats for the first three weeks of the LPX Show.

I suspect they’re skewed in a lot of ways because LPX is a pretty new show and a lot of “downloads” are counted when people click play on a widget embedded in a Liliputing article, which means listeners are actually streaming the show rather than downloading it. And I have no way of knowing if they’ve listened through to the end.

That’s actually a big problem with podcast stats in general. YouTube can tell me what percentage of people stopped watching a 10 minute video at the 45 second mark, giving me an idea of whether I’m taking too long to get to the point, (or maybe just a sense that people have short attention spans).

But podcasts are meant to be downloaded and listened to on the users own terms — so you might be using an app to download episodes that you never listen to.

I’ll probably never know how many people are actually listening to each episode of the LPX Show podcast, which is fine. But I am curious about how people are listening. 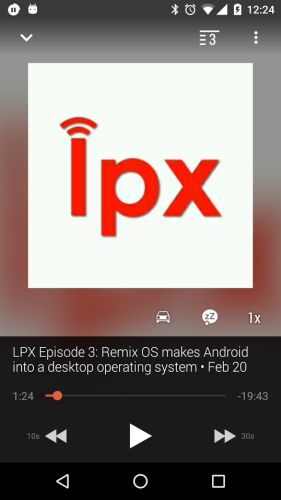 For example, I’ve been using the BeyondPod app for Android to listen to shows on my phone for years. But based on download stats for the LPX Show, I seem to be in the minority. Far more Android users seem to be coming to the show from Pocket Casts or Podcast Addict.

There are also a fair number of people using iTunes or other Apple technology to listen, which is kind of exciting to me. I know that the vast majority of people who read Liliputing are using Windows or Android, but I’m not trying to alienate iOS or OS X users. I just don’t write as much about those platforms because I’m less familiar with them. So it’s good to know that at least some Apple users are finding value from the LPX Show.

The largest percentage of the LPX Show audience so far, though, seems to be using Chrome or Firefox… which suggests they’re listening in a web browser, not through an app. I suppose that makes sense for casual listeners who don’t want to subscribe to a podcast, but will click play occasionally when they find an episode they want to hear.

So how do you listen to podcasts? I’m including a few of popular apps in this poll, but if you use something else, please write it in!

Oh yeah… if you are listening to the LPX Show using an app or service that supports reviews, please consider leaving a review! It helps me find out what you think and helps other people discover the show.