Huawei’s been selling a line of value-oriented phones under its Honor brand for the past few years, offering near-flagship hardware at mid-range prices. Now the company is expanding its Honor line to include laptops.

The company unveiled the Honor MagicBook at an event in China today. It’s a 14 inch notebook with slim bezels, an 8th-gen Intel Core processor, and NVIDIA graphics. It’ll be available in China next week for about $800 and up and it’s up for pre-order starting today.

While that’s not exactly cheap, it’s not a bad price for a thin-and-light notebook with discrete graphics. 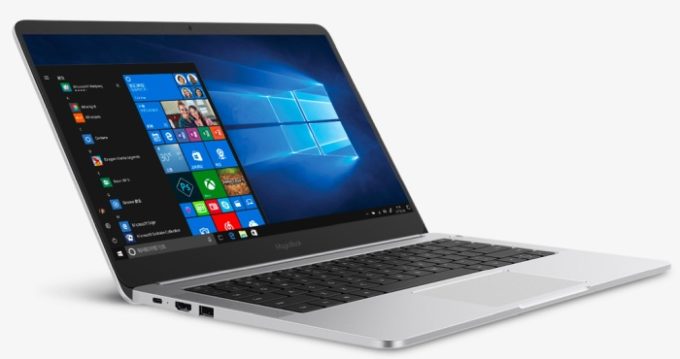 The MagicBook will be available in two configurations:

The laptop has a 1080p IPS display with an 81 percent screen-to-body ratio thanks to top and side bezels that are just 5.2mm thick. There’s also a hinge that lets you position the display at up to a 180 degree angle from the laptop’s backlit keyboard.

The MagicBook measures just over 0.6 inches thick at its thickest point and the notebook weighs about 3.2 pounds. It features four speakers with Dolby Atmos audio, headset and HDMI ports, a USB Type-C port (which functions as a charging port), one USB 3.0 Type-A port and one USB 2.0 Type-A port. There’s also a fingerprint reader built into the power button.

One feature that’s missing is a dedicated SD card reader. You’ll need a USB cable or an adapter if you want to transfer images or video from a camera. But if you just want to copy data to and from your phone, there’s a “MagicLink” application for transferring data from a smartphone.

There’s no word on if or when Huawei/Honor will offer the MagicBook outside of China. But the company is holding a global launch event for its new Honor 10 smartphone in London on May 15th, so we might learn more about international availability then.

via WinFuture and GizmoChina

6 replies on “Honor unveils its first laptop, the 14 inch MagicBook”