When Huawei launched the Honor MagicBook laptop last month, the company announce the 14 inch thin and light laptop would feature NVIDIA GeForce MX150 graphics, a choice of Intel Core i5-8250U or Core i7-8550U processors, and a starting price of about $800.

But it looks like Huawei forgot to mention that an AMD Ryzen Mobile version was also on the way.

Chinese online retailer JD is now showing a listing for a new Honor MagicBook with a Ryzen 5 2500U processor and Radeon Vega 8 graphics. 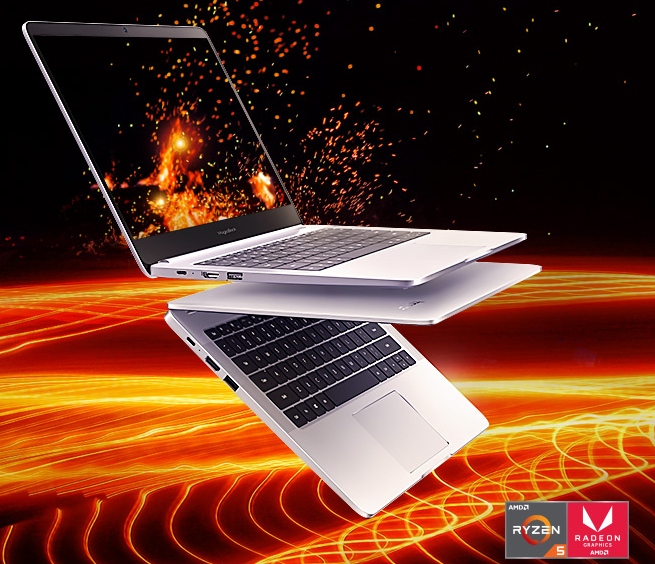 The pricing and release date aren’t available yet, but computers with AMD chips tend to be competitively priced compared to their Intel counterparts.

It’s worth noting that NVIDIA’s entry-level GeForce MX150 GPU tends to outperform AMD’s Radeon Vega 8 integrated GPU in most benchmarks. But both solutions should offer higher performance graphics than you’d get from Intel UHD 620 graphics.

Other specs for the Ryzen mobile version of the laptop seem to be similar to those for the Intel-powered models. It has a 14 inch, 1920 x 1080 pixel IPS display with 5.2mm bezels and an 81 percent screen-to-body ratio, 8GB of RAM, 256GB of solid state storage, and the laptop measures about 0.6 inches thick and weighs about 3.2 pounds.

The Honor MagicBook ha a 57.4 Wh battery, quad speakers, HDMI, and USB Type-C and Type-A ports, as well as a fingerprint reader in the power button.

There’s no word on if or when this model will be available outside of China.

One reply on “Honor MagicBook gets a Ryzen Mobile option”