Microsoft’s HoloLens is a wearable computer that puts a semi-transparent display in front of your eyes, allowing you to to interact with virtual objects in real-world environments.

This could be useful in medical, science, or industrial fields. But it also opens the door for new types of mixed-reality gaming… like the Project X-Ray game that Microsoft is showing off. 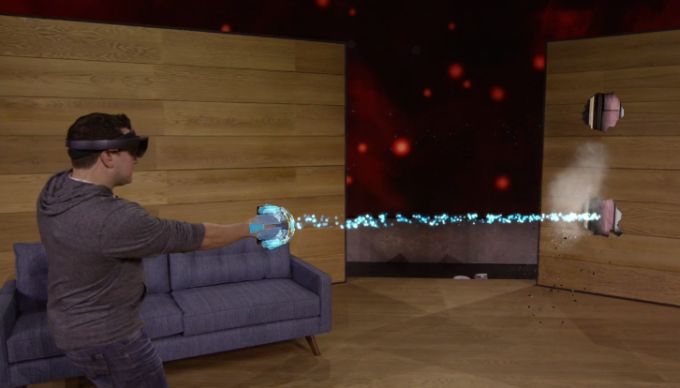 The game lets you wear a virtual hologram gauntlet, allowing you to shoot robots with a non-existent weapon. Those robots emerge in your real-world environment, and since the system is able to detect furniture and walls, each room in your home can be a virtual game level.

HoloLens also supports spatial sound, so that not only will you see robots attacking in different places, but you’ll hear them all around you.

Project X-Ray may be one of the first games for HoloLens, but it won’t be the last. Microsoft is taking applications from developers interested in purchasing a HoloLens dev kit. They’ll be available in the first quarter of 2016 for $3000.