Before their were smartphones, there were flip phones (and a whole bunch of other phones that were… less intelligent, I guess). But what’s old is new again, and HMD has been reviving classic phones for folks who don’t always need a full-fledged web browser and app store. 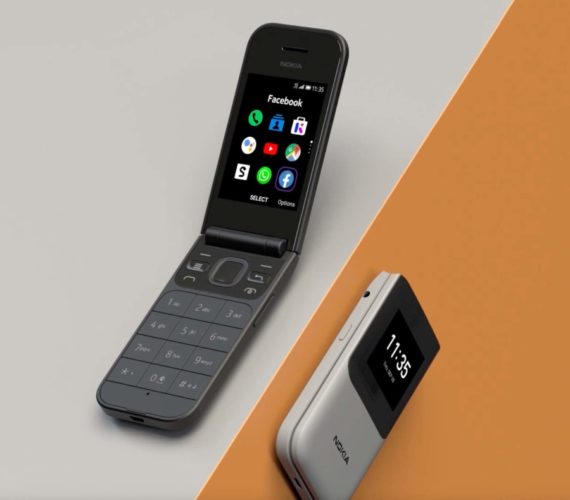 As the name suggests, the Nokia 2720 Flip is a flip phone. Flip it open and you get a small screen on one side, and a number pad on the other. Fold the phone closed and it’s small enough to easily slide into a pocket — but there’s also a small secondary display that can show the time, date, and other notifications.

This is very much a feature phone rather than a smartphone. It runs KaiOS and includes a few apps such as Facebook, WhatsApp, and Google Assistant. But there’s no physical keyboard, and has a much more limited set of apps than a device running Android or iOS.

The upshot is that HMD says you should be able to get up to 10 hours of talk time or 28 days of standby time from the phone’s removable 1,500 mAh battery when connected to a 3G network.

It also supports 2G and 4G networks as well as 802.11b/g/n WiFi and Bluetooth 4.2, and HMD will sell single-SIM and dual-screen versions of the Nokia 2720 Flip.

Specs include a Qualcomm Snapdragon 205 processor, 512MB of RAM, 4GB of storage, and a microSD card that supports up to 32GB of removable storage. The primary display is a 2.8 inch QVGA screen, while the front display is a 1.3 inch, 240 x 240 pixel screen.

The phone also has a micro USB 2.0 port, a headphone jack, and a 2MP rear camera.

Other new feature phones from HMD include the Nokia 110, which is a budget phone expected to sell for around $20 when it hits the streets this month, and the Nokia 800 Tough, which is HMD’s first rugged phone. It will launch in October for 109 Euros ($120) and features a MIL-STD-810G compliant design, IP68 water and dust resistance, and a non-removable 2,100 mAh battery said to last for up to 43 days of standby time or 14 hours of talk time, making the phone a promising device for folks who work or play outdoors.