But that’s starting to change. Google Pixel phones come with three years of guaranteed updates. Samsung flagships get up to four years. And even LG, which is shutting down its phone business, says it’ll deliver three major updates for existing phones.

Now HMD Global is launching six new low-cost and mid-range phones under the Nokia brand, and the company is promising to deliver up to three years of updates, depending on the model.

They’ll both ship with Android 11 software and HMD is promising to deliver “three years of security and software updates” for these devices, which are also Android One products that will ship with a near-stock version of Google’s Android user interface.

Key differences between the two phones are the cameras, memory, and storage features. The Nokia X10 has a 48MP primary camera and comes in 6GB/64GB, 6GB/128GB, and 4GB/128GB RAM/storage configurations, while the Nokia X20’s primary camera has a 64MP image sensor and the phone is available in 6GB/128GB or 8GB/128GB configurations. 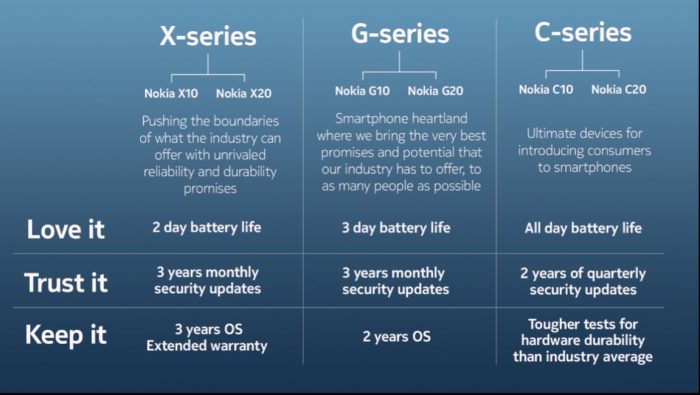 The company is pushing battery life as a key selling point on these 6.5 inch smartphones, promising up to three days of run time. When it comes to updates, the company says customers will get “three years of monthly security updates” but only “two years of OS updates.”

These phones… aren’t made to last as long. HMD is only promising “quarterly security updates for two years.”