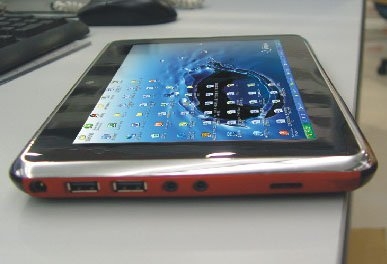 The Apple iPad is the first blockbuster tablet computer. While companies have been pumping out Windows tablets for the last 10 years or so, none has gotten as much attention as the iPad, and while I don’t have the sales numbers, I’m not aware of any other model that sold 300,000 units on the first day either. And Apple’s success in building hype for the iPad has led dozens of other companies to prepare similar machines with touchscreen displays and no physical keyboards. The problem is that many of them are missing the thing that makes the iPad work: A truly touch-friendly user interface.

Unfortunately, the tablet also runs Windows XP, which is an operating system that wasn’t really designed with touch in mind. In fact, you could make the case that even Windows 7 which has touch-friendly features like simulated right-click feels like touch was thrown in as an afterthought. Some software takes advantage of Windows 7 touch features, but most apps simply don’t.

Anyway, the long and short of it is, I can’t see why users would be happy with a tablet like the Hiton HT-960 which is basically just a Windows XP netbook without a keyboard and touchpad.

On the bright side, at $418, the tablet is a little cheaper than an iPad plus it can run Windows apps, has 16GB or more of storage, an SD card slot, and 3 USB ports for peripherals. It also has a 0.3MP webcam. On the less bright side, shipping is $69, which kind of eats into that price advantage.