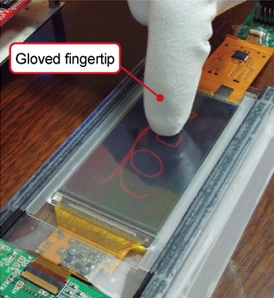 What sets capacitive screens apart from other touchscreen displays is the fact that you can interact with the screens using a fingertip… or two… or more. Capacitive displays react to the electrical impulses in your skin, which lets you tap the screen lightly without a stylus.

On the other hand, it’s a lot easier to write or draw with a stylus than it is with a fingertip, which is why some users and device makers prefer resistive touchscreens or active digitizers which let you use a stylus, fingernail, or other object with a finer point than your fingernail.

Some companies are trying to offer the best of both worlds by bundling a capacitive display with an active digitizer. That’s the approach HP took with the HP Slate 500. But Hitachi has another idea.

TechOn reports that Hitachi is developing a new type of touch panel which can recognize finger input, but also input from other devices including a plastic-tipped stylus, or even cloth. In other words, you’d be able to use a tablet or smartphone while wearing a glove, with your bare hands, or with a stylus for more precise input.

The screen supports multitouch input, and has a projection-type design much like a typical capacitive display. The scresns should be just as responsive as existing displays. They also won’t be any thicker.

Hitachi is reportedly making samples available right now, with screens ranging from 3 to 10 inches in size.