Hisense introduced one of the more interesting tablets of 2013, a low-cost 7 inch tablet that could give the original Nexus 7 a run for its money. So even though Hisense hasn’t announced any new tablets for the US market for 2014 yet, I went looking to see what I could find at the Hisense booth at CES.

I thought I stumbled across the company’s next great tablet… but it turns out it’s actually a phone. But the Hisense X1 is the kind of phone that could totally make you forget about your tablet… if it were available in your region. Unfortunately the X1 will only be available in China at launch.

Update: Engadgets reports that Hisense plans to bring the X1 to the US this summer 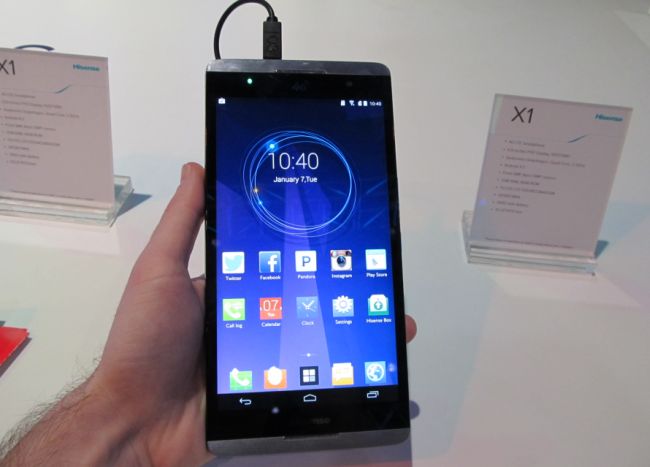 All told, if last year’s Hisense Sero 7 Pro was basically a Nexus 7 clone, this is virtually a Nexus 7 (2013) clone, but with an even faster processor, a slightly smaller screen, and integrated 4G LTE and smartphone features.

Of course, at 6.8 inch phone might be too big to keep in your pocket, so Hisense offers accessories including a Bluetooth handset that’s probably thinner and lighter than the phone you carried in your pocket back in 2006. You can keep your tablet in your bag and use the tiny handset to make and receive calls.

Hisense is showing off a few new 7 inch WiFi-only tablets with MediaTek processors this year, but they’re for the Chinese market only and to be honest, the specs are pretty underwhelming. The company does plan to offer new tablets in the US later in 2014, but Hisense isn’t ready to announce those new products yet.

8 replies on “Hisense X1 is a 6.8 inch smartphone that could replace your tablet”