The Hisense Vidaa Mirror is a tablet with an 8.4 inch, 2560 x 1600 pixel display and a Rockchip RK3288 processor. But it’s what the tablet doesn’t have that really makes it stand out: thick bezels.

While this tablet isn’t exactly bezel-free, it has a higher screen-to-bezel ratio than just about any other tablet I’ve seen.

Hisense introduced the Vidaa Mirror as the “Magic Mirror” a few months ago, and the company is showing it off at the Consumer Electronics Show in Las Vegas this week. Unfortunately Hisense is only selling the tablet in China right now, and there are no plans to bring it to the United States anytime soon. 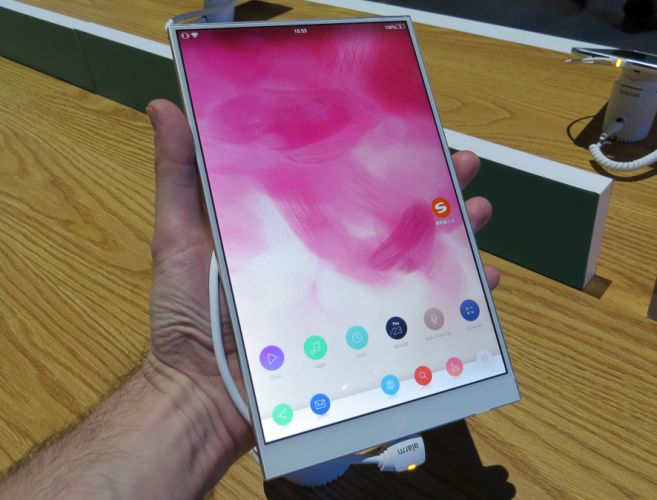 The screen is surrounded by super-thin bezels around the left, right, and top sides (when held in portrait mode). There’s a slightly larger bezel at the bottom, where you’ll find a dedicated capacitive home button. But even that bezel is pretty slim.

The tablet also has a pretty slim profile from the side. At first glance it looks like it’s only about 0.15 inches thick, but that’s because the sides slope a bit. At the thickest point in the center of the tablet, it’s actually about 0.3 inches thick. That’s still pretty small though.

Hisense equips the tablet with 2GB of RAM and 32GB of storage and it currently ships with a custom version of Android 5.0 Lollipop.

There aren’t many buttons or ports. I’m not sure where Hisense would have put them.

I’m not entirely convinced that a tablet with nearly invisible bezels is all that useful: you’re probably going to end up covering part of the screen with your fingers when holding it. But it sure is pretty to look at.