Chinese electronics maker Hisense has a habit of making smartphones with E Ink displays — but they’re typically dual-screen phones with a color screen on one side and a black and white ePaper display on the other.

Now the company is showing off a new phone with a color E Ink display. That means it has the benefits of electronic paper including low power consumption and outdoor visibility. But it can also display color graphics on the same screen.

This probably isn’t going to be a great phone for watching video, playing games, or anything else that requires a high refresh rate though. Actually, it’s not clear if it’s going to be a real phone at all — Hisense hasn’t announced any pricing or availability details. But it’s still interesting to see the company continuing to work with E Ink. 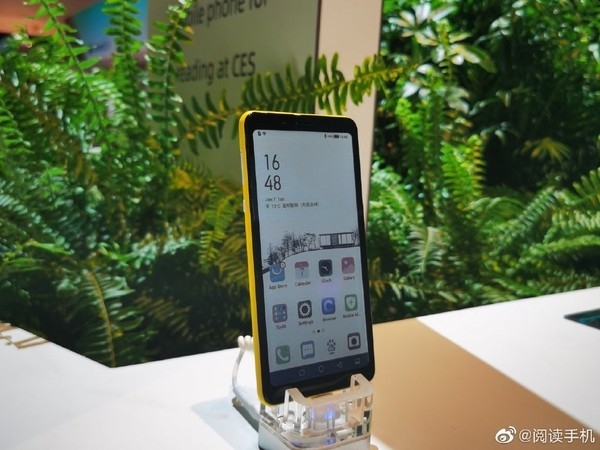 While E Ink is typically associated with black and white devices like Kindles and other eBook readers, the company behind the technology has actually been developing color E Ink displays for years.

The latest version is called Print Color, and when we first heard about it last month it seemed like it was most likely destined for digital signage and other retail and commercial applications.

And according to a press release E Ink put out this week, that’s definitely one use case for the new screens. But the company says the technology could also be used in consumer electronics… you know, like smartphones, tablets, and eReaders.

The new technology features a printed Color Filter Array and E Ink Carta 1100 ink. The company says the displays are thinner and lighter than its previous-gen color screens, making color E Ink a more viable solution for eBook readers and other devices. It’s also said to support “quicker updates for animations and video,” but I wouldn’t expect the 60 Hz to 120 Hz refresh rates we’ve come to expect from modern smartphones… and bumping up the refresh rate also eliminates one of the key reasons to use E Ink: power savings.

E Ink displays only consume power when the image on the screen changes. It takes no power at all to show a static image, which means you can display a page of a book indefinitely, even if an eReader has completely lost power. On smartphones that means it would also take no power to show a home screen (until you touch it), or a boarding pass or other information. Even if it’s possible to crank things up and redraw the screen at 30 frames per second or more, the battery drain would increase significantly.

Still… I remain intrigued by the idea of a smartphone with a display that’s fully visible in direct sunlight, doesn’t require a backlight, and which could offer extra-long battery life if you don’t play a lot of games or watch a lot of videos.

Update: Android Police tracked down the HiSense color E Ink smartphone at the Consumer Electronics Show, and not surprisingly, the colors look dull, the screen refresh rate is low, and the screen does support illumination for viewing in dark or dime environments, but it’s not a necessity. Battery life is said to be up to four days.

And KLGadgetTV has one of the only hands-on videos I’ve seen. It makes it clear just how washed out the colors look in bright light, and how slow the screen refresh rate is:

While the phone could certainly be useful for folks looking for a simple device with long battery life, it seems to be less than ideal for media consumption, photography, or gaming.

Interestingly, Hisense isn’t the only company showing off an E Ink smartphone this week. Russian eReader company Onyx is also demonstrating a 5.8 inch smartphone with a black and white E Ink display at CES. Notebook Italia has the details.

via CNMO, GizmoChina, and Tom’s Hardware