Chinese electronics company Hisense is getting ready to launch a new smartphone with two screens: a full color display on the front and a black and white E Ink screen on the back.

There aren’t many details about the upcoming smartphone, which should be formally announced next week. But the company has posted an image showing both sides of the device to social networking site Weibo. 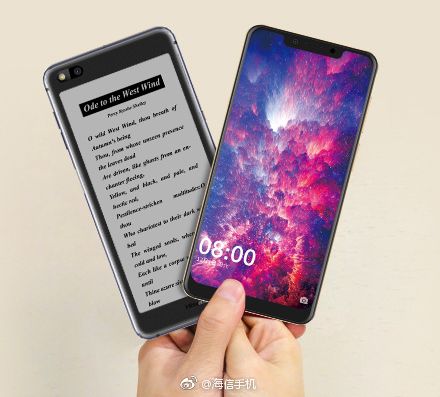 This wouldn’t exactly be the first device of its type. Yota Devices has released a few color + E Ink phones over the past few years, and in 2016 Hisense launched its own version called the Hisense A2. In fact, you can still pick one up for about $230 if you don’t mind the dated specs.

The new phone looks a lot like the Hisense A6 on the back. The camera and screen layout seem to be nearly identical.

But the front of the new phone features a notch in the top of the display, which either gives you more screen space or less, depending on how you think about notches.

There’s no word on whether the new phone will feature any other changes. But it’s interesting to see that dual screen phones continue to be a thing… at least in China.