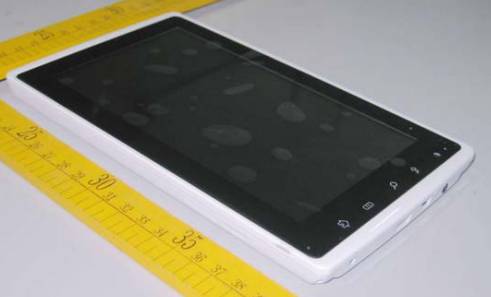 You know, I’m pretty sure I could fill a blog with cheap Android tablets spotted at the FCC website. In fact, I think that I’m starting to do that here… I promise to cool it soon, but this one actually looks a little interesting since it’s one of the few I’ve seen that has a 1 GHz ARM Cortex-A9 dual core processor instead of a Cortex-A8 chip.

At least I think it does. The user manual actually says the tablet has an “ARM Certex A9Dual core @ 1GMHz.” I’m going to assume someone did a bad job with the translation. The tablet also appears to support HDMI output, a compass and g-sensor, and it has a capacitive touchscreen display.

It’s not clear what version of Android the tablet runs, but it appears to be Android 2.3 or earlier.

There’s no word on the price, release date, or whether or not this tablet will even be sold in the United States. But it’s appearance at the FCC makes a good case for someone at least thinking about offering this tablet in the US.