You may not be able to buy a MeCam flying camera for $49 just yet (it’s expected to hit the streets in 2014). But $49 is enough to buy you a tiny quad-coptor that you can control with your smartphone.

Hex is a nanocoptor kit that’s based on open source designs, and which is expected to ship in December. The team behind Hex are trying to raise funds for the project on Kickstarter, and they’ve already blown past their $10,000 goal, which means the project is fully funded a month and a half before the deadline. 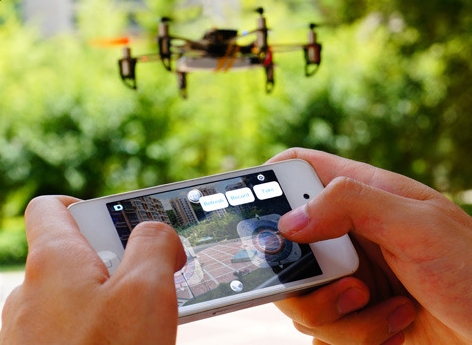 Hex uses Bluetooth 4.0 to communicate with your phone, and then you can use touch-based controls or the gravity sensors in your phone to control movements of the flying drone.

It also features auto-stabilization to reduce the risk of crashing when you’re not paying attention.

Aside from the low price, there are a few things that set this kit apart, including support for custom shells which can be 3D printed to fit. You can choose from existing shells or design your own.

The Hex hardware and software are open source and Arduino-compatible, which makes it easy for folks who are comfortably programming Arduino devices to alter the behavior of the nanocopter.

The kits consists of propellers, motors, a shell, and a board with a processor, sensors, and other goodies. It’s battery-powered, but like most tiny quad-copter, Hex can’t carry a lot of weight — so it’s equipped with a relatively small battery that only provides about 7 minutes of flight time.

While the basic kit is available for a Kickstarter pledge of $49, a pledge of $159 or more will gets you a kit that includes a WiFi webcam and a “photographer” shell, which lets you shoot video and send it to your phone in real-time.

There’s also a $469 “Spy Set” which includes a set of glasses that gives you a first-person view of what your little drone is seeing through its camera.