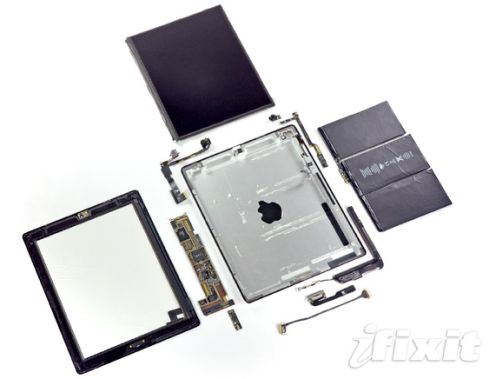 The Apple iPad 2 went on sale today, and a surprisingly large number of Liliputing readers (or people who found our poll anyway) say they’re interested in buying one. But you know who was near the front of the line at the Apple Store today? The folks at iFixit, who seem to have a hankering to rip apart any new gadget they can get their hands on so they can learn how one would go about repairing it.

They’ve posted an iPad  teardown guide with high quality photos of the tablet in various states of undress. The short version is that the tablet is mostly screen and battery, and it’s not really all that easy to pry apart — although at least you don’t need a proprietary screwdriver (which has been the case with other Apple products). But you do need a heat gun to melt the glue holding the tablet together.

With the hood off, iFixit was able to confirm that the iPad 2 has 512MB of RAM, a 1 GHz Apple A5 dual core processor, a 9.7 inch capacitive multitouch IPS display, a VGA front-facing camera and a 720p rear camera. There’s a 25 Whr battery which may be a tiny bit more powerful than the 24.8Whr battery in the original iPad.

There flash storage module is made by Toshiba, while the touchscreen controllers and WiFi/Bluetooth/FM radio chip are made by Broadcom.

You can find more details at iFixit.

One reply on “Here’s what makes the iPad 2 tick”