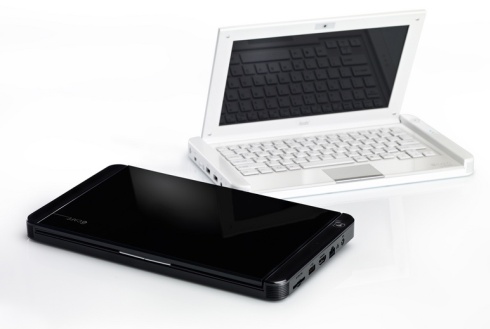 Hercules has been cranking out Intel Atom powered Windows netbooks for a few years. Now the company is taking another approach, with two new thin and light netbooks powered by ARM-based processors. The Hercules eCafe Slim HD and Hercules eCafe Ex HD are expected to ship in April, for around $229 and $269 respectively.

The mini-laptops feature an unusual design with a 10 inch display which folds down into the body for extra protection. While Hercules gets points for trying something different, tt looks to me like this means the netbook has a smaller than average keyboard and a wider than average case.

Both the Slim HD and Ex HD feature ARM Cortex-A8 processors, 1024 x 600 pixel displays, 512MB of DDR2 RAM, 802.11b/g/n WiFi and Ethernet. Both computers have a webcam, 3 USB 2.0 ports, a mini-USB port for connecting to a Windows, Mac or Linux PC for file transfer, and an SDHC card reader for expansion. There’s also an internal SDHC card tucked away under the hood for expanding the storage capacity of the laptop.

Hercules says both models should be able to handle 720p HD video playback and can wake from sleep in just 4 seconds. The computers will ship with a custom Linux-based operating system called Hercules eCafe Netbook OS. It includes a Microsoft Office-compatible office suite, and a media player that can handle MKV, DiVX, Xvid, MPEG-2, H.264, and other audio and video formats.

The eCafe Slim’s claim to fame is a thin and light design. The netbook measures 0.8 inches thick and weighs 1.9 pounds. It will come with an 8GB solid state disk and will sell for about $229.

The Hercules eCafe Ex HD weighs 2.4 pounds and measure 1.1 inch thick, but it have 16GB of storage thanks to an 8GB SSD and 8GB SDHC card. This model will also have an HDMI port for displaying 720p video on an external display and Hercules says it can get up to 13 hours of battery life. It will sell for $269.

One reply on “Hercules banks on ARM chips, Linux for its latest 10 inch netbooks”