There’s no shortage of tiny PC-on-a-stick products these days, but the HardWhere is something new.

This tiny computer has a dual-core ARM-based processor, 1GB of RAM, and 8GB of built-in storage. But the computer’s Linux-based operating system, apps and files aren’t stored on the built-in storage. Instead, they hang out on a removable microSD card.

Remove your microSD card and insert another and multiple people can use the same HardWhere stick. 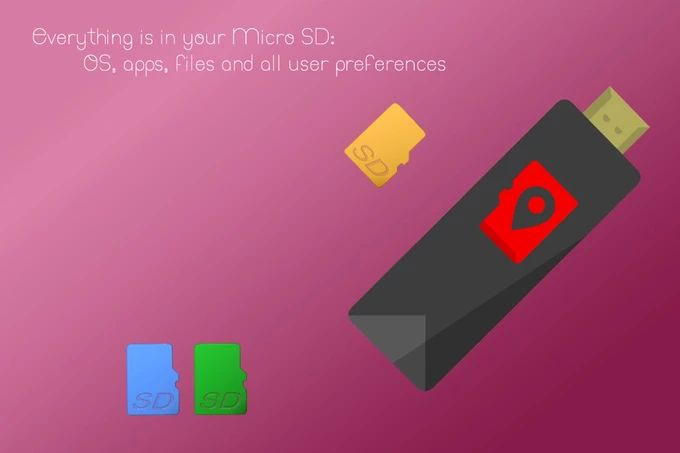 The developers of the HardWhere are running a Kickstarter campaign to raise money for the project. Early backers can request a HardWhere device with a 16GB microSD card for a pledge of €30 or more.

That’s about $35 US, and roughly half the eventual price of a retail unit. But the price doesn’t include shipping, which adds another €20 ($23).

The system comes with a custom Linux-based operating system with support for desktop apps including LibreOffice and VLC. But the computer can also run Google Android if you want to use apps which aren’t available for the version of Linux running on the HardWhere.

While it’s possible to install Ubuntu or other Linux-based software on a number of other PC sticks, this is one of the first models I’ve seen that not only comes with a desktop Linux distro, but which runs that software from microSD cards as a way to make it easy to switch user profiles by switching storage cards.

Since this system uses an unspecified ARM-based chip, one thing it cannot do is run Windows. If you want a Windows PC-on-a-stick, you’ll need to use a system with an x86 processor, like an Intel Compute Stick.