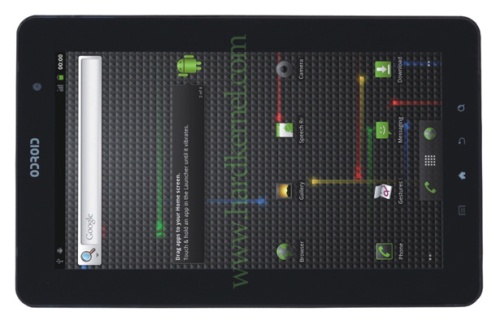 Korea’s Hardkernel has announced it will begin shipping an Android tablet called the ODROID-A in late March. There’s nothing too surprising there. It seems like a new Android tablet comes out every other day. What makes this one special though, is that it will be one of the first devices to hit the streets with a Samsung Exynos 4210 dual core processor.

Samsung’s new tablet, on the other hand, will use an NVIDIA chip. Go figure.

The Hardkernel ODROID-A will have a 10.1 inch, 1366 x 768 pixel display with a multitouch capacitive touchscreen and a Mali-400 graphics core. It runs Google Android 2.3 Gingerbread, has front and rear cameras, and supports WiFi, Bluetooth, and HSPA+ wireless connections as well as GPS. It has 8Gb of storage, HDMI output, a gyroscope, and G-sensor.

Hardkernel is describing the ODROID-A as a developer tablet, which might explain the relatively hefty price tag of $749.